The Adventures of Tintin: Volume 2 (3 Original Classics in 1) (Hardcover) 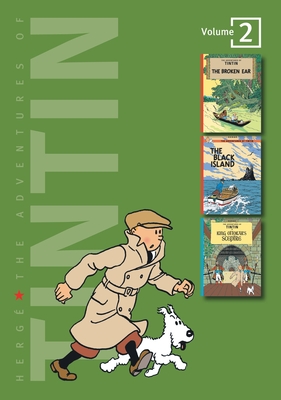 The Adventures of Tintin: Volume 2 (3 Original Classics in 1) (Hardcover)

Join traveling reporter Tintin and his faithful dog Snowy, along with well-known friends such as Captain Haddock, as they embark on extraordinary adventures spanning historical and political events, fantasy and science-fiction adventures and thrilling mysteries. These full-color graphic novels broke new ground when they were first released and became the inspiration for countless modern-day comic artists.

This repackaged hardcover volume contains 3 classic Tintin stories, including: Tintin and the Broken Ear, The Black Island, and King Ottokar's Sceptre.
Hergé, one of the most famous Belgians in the world, was a comics writer and artist. The internationally successful Adventures of Tintin are his most well-known and beloved works. They have been translated into 38 different languages and have inspired such legends as Andy Warhol and Roy Lichtenstein. He wrote and illustrated for The Adventures of Tintin until his death in 1983.