Amira & Hamza: The Quest for the Ring of Power (Hardcover) 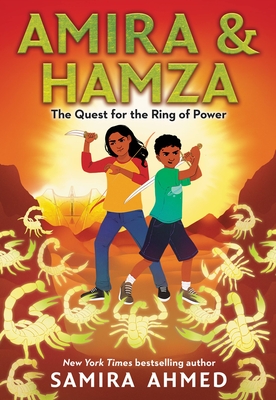 Amira & Hamza: The Quest for the Ring of Power (Hardcover)


On Our Shelves Now at:
Amira and Hamza are back in this epic sequel, which takes readers on a thrilling magical adventure as the siblings face their most terrifying and formidable opponent yet.

All human and jinn kind shall bow down to me. Control the Ring, control the worlds.

Amira and Hamza have returned from Qaf, the magical Jinn world, as triumphant heroes—and life has been pleasantly quiet. Too quiet. Hamza is determined to have one last monumental, epic adventure before summer ends. But when sneaking off to explore an old, abandoned castle goes from life-changing adventure to potentially deadly, Amira and Hamza find themselves in the middle of another dangerous quest to save the worlds. One they didn’t bargain for.

The siblings are brought face to face with the evil dev, Ahriman, angry and out for revenge. And if Amira and Hamza thought Ifrit was bad, his dad Ahriman, the last in an ancient line of fire spirits, is far worse. Ahriman kidnaps Hamza and forces him to help locate the lost Ring of Power, an ancient and mysterious artifact that will allow him to rule the universe. Desperate to save her brother, Amira must outsmart perilous traps and confounding puzzles in a race against time to retrieve the artifact before Ahriman does or say goodbye to Hamza and their world forever.

Samira Ahmed is the New York Times bestselling author of Amira & Hamza: The War to Save the Worlds Love, Hate & Other Filters, Mad, Bad, and Dangerous to Know, Internment, and Hollow Fires. She was born in Bombay, India, and has lived in New York, Chicago, and Kauai, where she spent a year searching for the perfect mango. She invites you to visit her online at samiraahmed.com and on Twitter and Instagram @sam_aye_ahm.

“Samira Ahmed’s Amira & Hamza: The War to Save the Worlds is a universe-hopping, time-traveling, mind-bending story that glows with enough energy to rival the moon. Brimming with science and magic alike, it’s also a bighearted and funny adventure, and readers will cheer Amira and Hamza every step of the way.”—Trenton Lee Stewart, bestselling author of The Mysterious Benedict Society and The Secret Keepers

"Ifrit and Jinn and Peris, oh my! This rollicking adventure weaves together ancient Islamic stories, modern day U.S. pop culture, sibling squabbles and death-defying feats. Amira and Hamza are my Chosen Ones!" —Sayantani DasGupta, New York Times-bestselling author of the Kiranmala and the Kingdom Beyond series

"Even readers who don’t believe in magic will find themselves wishing on a star."—Kirkus

Amid myriad twists and turns, Amira and Hamza emerge as smart, funny, likable protagonists with emotional ranges that render them believable even while everything around them is fantastical. —Booklist

"Like any magical journey, this one is full of heart, humor, action, doubt, and the belief that even the most unexpected individuals can save the world."—School Library Journal

"Fantasy-adventure fans will have a hard time putting down this fast-paced and engaging tale."—Horn Book