The Onion Magazine: The Iconic Covers that Transformed an Undeserving World (Hardcover) 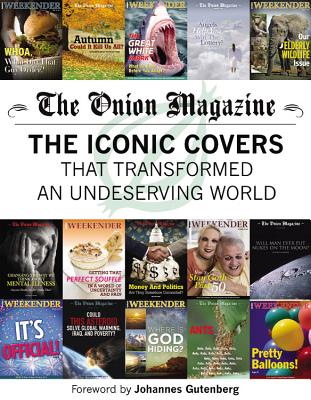 The Onion Magazine: The Iconic Covers that Transformed an Undeserving World (Hardcover)


Special Order—Subject to Availability
From America's Finest News Source comes a compilation of the most important, most influential, and glossiest magazine covers ever produced by the hand of humankind.

Seen by tens of billions worldwide, these are the unforgettable Onion Magazine covers that altered the course of human history and radically redefined your trivial life anew every weekend. Profound philosophical questions, the thoughts of leading cultural luminaries, harsh truths of existence, remorseless personal attacks -- you will encounter full-color graphical representations of all of these within this handsome volume. Whether you are a connoisseur of pretty pictures or are new to looking at images, The Onion Magazine: The Iconic Covers that Transformed an Undeserving World is sure to give you, the feebleminded consumer, far more pleasure than you have any earthly right to experience.
Since its founding by a Prussian tuber farmer in 1756, The Onion has attracted millions of loyal fans drawn to its fearless reporting and scathing commentary on world events, human behavior, and journalistic convention, and it has expanded into an omnipotent news empire, with Webby Award-winning TheOnion.com, Clickhole, and multiple bestselling books, including Our Dumb Century (1999), Our Dumb World (2007), and The Onion Book of Known Knowledge (2012). Its home offices are in Chicago.
Praise for The Onion Magazine:

"Sometimes sly social commentary, sometimes just stupidly funny, a collection of the covers of fictional magazines from satirical news organization The Onion have a cumulatively hilarious effect."—The Globe and Mail

"One might think the Onion would have lost some of its bite over the years, but its latest book shows the satirical outfit is as sharp as ever, and deeply hilarious on so many levels."—Jill Wilson, Winnipeg Free Press

Praise for The Onion Book of Known Knowledge:

"An encyclopedic fun house of information and illustrations teeming with hundreds of entries covering everything from the letter A to Zibby the cartoon squirrel."—Elle

"One of the best works that The Onion has ever produced...[it] dryly parodies an encyclopedia in the most comprehensive manner imaginable."—Huffington Post Comedy

"A tome so replete with knowledge [that it allows readers] to win friends and influence people."—Entertainment Weekly