Besos for Baby: A Little Book of Kisses (Board book) 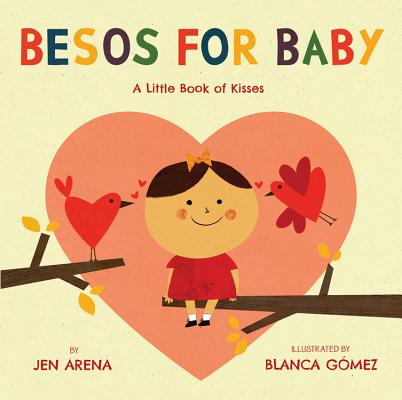 Besos for Baby: A Little Book of Kisses (Board book)


On Our Shelves Now at:
Everyone has kisses for Baby, from Mami and Papi to perro and gato. Using simple Spanish words, this charming read-aloud proves that love is the same in every language! Parents won't be able to resist giving baby muchos besos as they share this bilingual read aloud, filled with bold, graphic illustrations, with their little bébé!

Formerly an editorial director at Random House BFYR, Jen Arena has written over 50 books for kids, including fiction and nonfiction, licensed and original. Her books have been published by Knopf, Roaring Brook, Scholastic, Kane Press, Grosset & Dunlap, DK, Two Lions, Bearport Publishing, and Little Brown and translated into French, Spanish, Korean, and Arabic.

Blanca Gómez is an illustrator living and working in Madrid, Spain. She started doing illustrations for my mother when she was a kid; now she makes illustrations for clients around the world, for her own shop catalog and, of course, sometimes for her mom too.
Praise for Besos for Baby:A Texas Library Association 2x2 Reading List Selection
"Each two-page spread features a bouncy rhyme in English followed by the perky Spanish refrain. Gomez's cute and blocky illustrations in cheery colors clearly depict each character, and a picture glossary at the end defines each Spanish word. Little ones will be delighted by the happy faces and affectionate world little bebé explores."—Booklist