Bleed for Me (Joseph O'Loughlin #4) (Paperback) 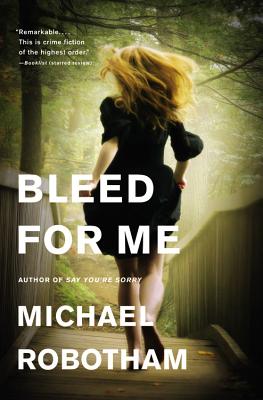 Bleed for Me (Joseph O'Loughlin #4) (Paperback)


Not On Our Shelves—Ships in 1-5 Days
She's standing at the front door. Covered in blood. Is she the victim of a crime? Or the perpetrator?

A teenage girl -- Sienna, a troubled friend of his daughter -- comes to Joe O'Loughlin's door one night. She is terrorized, incoherent, and covered in blood.

The police find Sienna's father, a celebrated former cop, murdered in the home he shared with Sienna. Tests confirm that it's his blood on Sienna. She says she remembers nothing.

Joe O'Loughlin is a psychologist with troubles of his own. His marriage is coming to an end and his daughter will barely speak to him. He tries to help Sienna, hoping that if he succeeds it will win back his daughter's affection. But Sienna is unreachable, unable to mourn her father's death or to explain it.

His newest thriller is further evidence that Michael Robotham is, as David Baldacci has said, "the real deal -- we only hope he will write faster."
Michael Robotham has been an investigative journalist in Britain, Australia and the US. One of world's most acclaimed authors of thriller fiction, he lives in Sydney with his wife and three daughters.
"This remarkable novel offers everything those 'literary' detective novels ought to but usually don't. This is crime fiction of the highest order."—Booklist (starred review)