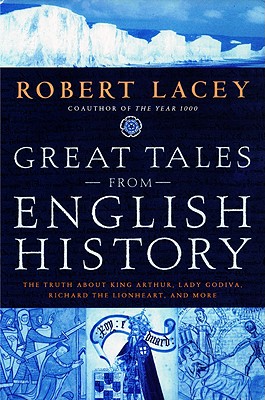 
Not On Our Shelves—Ships in 1-5 Days
With insight, humor and fascinating detail, Lacey brings brilliantly to life the stories that made England -- from Ethelred the Unready to Richard the Lionheart, the Venerable Bede to Piers the Ploughman.

The greatest historians are vivid storytellers, Robert Lacey reminds us, and in Great Tales from English History, he proves his place among them, illuminating in unforgettable detail the characters and events that shaped a nation.

In this volume, Lacey limns the most important period in England's past, highlighting the spread of the English language, the rejection of both a religion and a traditional view of kingly authority, and an unstoppable movement toward intellectual and political freedom from 1387 to 1689.

Opening with Chaucer's Canterbury Tales and culminating in William and Mary's "Glorious Revolution," Lacey revisits some of the truly classic stories of English history: the Battle of Agincourt, where Henry V's skilled archers defeated a French army three times as large; the tragic tale of the two young princes locked in the Tower of London (and almost certainly murdered) by their usurping uncle, Richard III; Henry VIII's schismatic divorce, not just from his wife but from the authority of the Catholic Church; "Bloody Mary" and the burning of religious dissidents; Sir Francis Drake's dramatic, if questionable, part in the defeat of the Spanish Armada; and the terrible and transformative Great Fire of London, to name but a few.

Here Anglophiles will find their favorite English kings and queens, villains and victims, authors and architects - from Richard II to Anne Boleyn, the Virgin Queen to Oliver Cromwell, Samuel Pepys to Christopher Wren, and many more.

Continuing the "eminently readable, highly enjoyable" (St. Louis Post-Dispatch) history he began in volume I of Great Tales from English History, Robert Lacey has drawn on the most up-to-date research to present a taut and riveting narrative, breathing life into the most pivotal characters and exciting landmarks in England's history.
Robert Lacey is the coauthor of The Year 1000 and the author of such bestselling books as Majesty, The Kingdom, and The Queen Mother's Century. He lives in London.