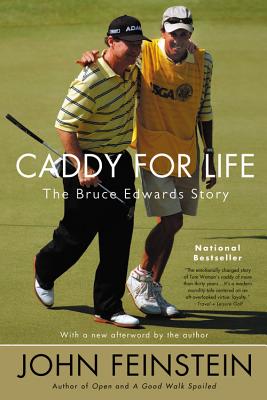 
Not On Our Shelves—Ships in 1-5 Days
Beyond golf's polished surface there lies a world not often seen by the average fan. The caddy sees everything - the ambition, the strategy, the rivalries, the jealousies - that occurs behind the scenes. Award-winning John Feinstein, America's favourite sportswriter, got one of golf's legendary caddies to reveal the secrets behind the most popular sport of our time.

Bruce Edwards was diagnosed with Lou Gehrig's disease in January 2003, a progressive disease that attacks nerve cells in the brain and the spinal cord, but he dominated coverage of the 2003 US Open. This is a position not usually bestowed on a caddy, but Edwards was no ordinary caddy. In 1973, after forgoing college, Edwards walked on the course behind a young Tom Watson and never looked back. Watson would go on to win eight major titles with Bruce Edwards by his side. Edwards continued to do the job he had dedicated more than half his life to right up to his death in April 2004, aged 49. This is a moving, dramatic and thoughtful book about a life devoted to sports.
John Feinstein is the author of many widely acclaimed and bestselling books on sports, including One on One, Moment of Glory, Are You Kidding Me?, Living on the Black, Tales from Q School, Last Dance, Next Man Up, Let Me Tell You a Story (with Red Auerbach), Caddy for Life, Open, The Punch, The Last Amateurs, The Majors, A Good Walk Spoiled, A Civil War, A Season on the Brink, Play Ball, and Hard Courts. He is also the author of five sports mystery novels for young readers. He writes for the Washington Post, Washingtonpost.com, and Golf Digest, and is a regular commentator on The Golf Channel.