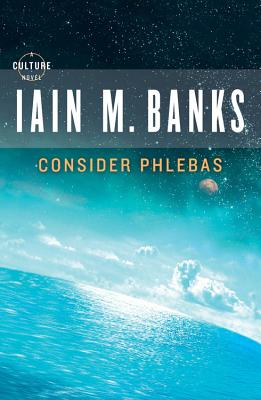 
On Our Shelves Now at:
The first book in Iain M. Banks's seminal science fiction series, The Culture. Consider Phlebas introduces readers to the utopian conglomeration of human and alien races that explores the nature of war, morality, and the limitless bounds of mankind's imagination.

The war raged across the galaxy. Billions had died, billions more were doomed. Moons, planets, the very stars themselves, faced destruction, cold-blooded, brutal, and worse, random. The Idirans fought for their Faith; the Culture for its moral right to exist. Principles were at stake. There could be no surrender.

Within the cosmic conflict, an individual crusade. Deep within a fabled labyrinth on a barren world, a Planet of the Dead proscribed to mortals, lay a fugitive Mind. Both the Culture and the Idirans sought it. It was the fate of Horza, the Changer, and his motley crew of unpredictable mercenaries, human and machine, actually to find it, and with it their own destruction.

The Culture Series
Consider Phlebas
The Player of Games
Use of Weapons
The State of the Art
Excession
Inversions
Look to Windward
Matter
Surface Detail
The Hydrogen Sonata
Iain Banks came to controversial public notice with the publication of his first novel, The Wasp Factory, in 1984. He has since gained enormous popular and critical acclaim for both his mainstream and his science fiction novels.