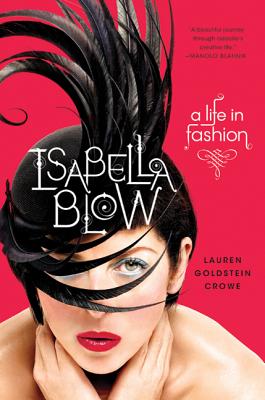 An extraordinary biography of Isabella Blow, whose pedigree, wild style, and outrageous antics catapulted her onto the London social scene and made her a fashion icon.

In 2007, the news of Isabella Blow's suicide at the age of 48 made headlines around the world—but there is more to the story of Isabella than her tragic end. The key supporter and muse of milliner Philip Treacy and designer Alexander McQueen, Blow was truly more than a muse or patron. She was a spark, an electrical impulse that set imaginations racing, an individual who pushed others to create their best work.

Her fascination with clothing began early, as did a willingness to wear things—and say things—that would amuse and shock. She began her fashion career in New York City as assistant to Anna Wintour at Vogue. Over time she became famous for her work, yet it wasn't enough to assuage her devastating feelings of inadequacy. Still, in her darkest moments, even as she began a series of suicide attempts and prolonged hospital stays, Blow retained her wicked sense of humor, making her friends laugh even as they struggled to help.

Lauren Goldstein Crowe has crafted a superbly entertaining narrative; wrapping the anecdotes of Isabella's antics around a candid, insightful portrayal of a woman whose thirst for the fantastical ultimately became irreconcilable with life in the real world.

Lauren Goldstein Crowe has written about the fashion industry for over a decade as a columnist at Conde Nast Portfolio.com and Time magazine in London. She is the author of Isabella Blow and The Towering World of Jimmy Choo, co-written with Sagra Maciera De Rosen.  Lauren is American and lives in London.

“To tell the story--the times, the impact, the inspiration, the misery, the dreams, the fantasy, the allure of Isabella--you would think you'd need 100 writers; but Lauren Goldstein Crowe has been able to tell us all this in one very good book.” —Valentino

“If you did not have the great privilege of meeting Isabella when she was alive, buy this book and meet her now.” —Kelly Cutrone, New York Times bestselling author of IF YOU HAVE TO CRY GO OUTSIDE: And Other Things Your Mother Never Told You

“A triumphant portrait of the Isabella I knew and loved.” —Philip Treacy

“If there is a fashion icon besides Anna Wintour who deserves a full-blown biography, it's Isabella Blow. Lauren Goldstein Crowe has finally put her colorful life in perspective.” —Jerry Oppenheimer, author of FRONT ROW: The Cool Life and Hot Times of Anna Wintour