Queen of Fashion: What Marie Antoinette Wore to the Revolution (Paperback) 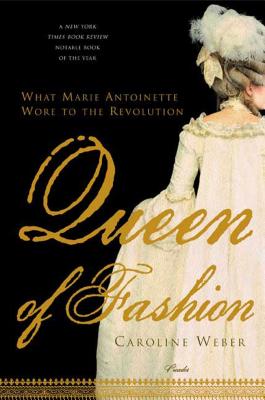 Queen of Fashion: What Marie Antoinette Wore to the Revolution (Paperback)

A Washington Post Book World Best Book of the Year

When her carriage first crossed over from her native Austria into France, fourteen-year-old Marie Antoinette was taken out, stripped naked before an entourage, and dressed in French attire to please the court of her new king. For a short while, the young girl played the part.

But by the time she took the throne, everything had changed. In Queen of Fashion, Caroline Weber tells of the radical restyling that transformed the young queen into an icon and shaped the future of the nation. With her riding gear, her white furs, her pouf hairstyles, and her intricate ballroom disguises, Marie Antoinette came to embody--gloriously and tragically--all the extravagance of the monarchy.

Caroline Weber is associate professor of French at Barnard College, Columbia University. A specialist of eighteenth-century French literature, culture, and history, she has also taught at the University of Pennsylvania and Yale University. Her publications include Queen of Fashion: What Marie Antoinette Wore to the Revolution; Terror and Its Discontents, a well-received and widely taught book on the Reign of Terror; an edited volume of Yale French Studies; and numerous academic articles. She lives with her husband in New York City.

“A perceptive work of scholarship that helps to explain the transcendent importance of fashion to French culture.” —The New Yorker

“Queen of Fashion is as richly imagined as the gowns it describes. . . . As sociology, it's nothing short of stunning.” —The Washington Post Book World

“Absorbing, fascinating, a wonderful display of grace and expertise.” —The New York Review of Books

“A thrilling frock-by-frock account . . . While this book is rigorously researched, Weber's narrative style is energetic and alive with her own feminine pleasure at a beautiful dress or an outrageous pouf.” —Entertainment Weekly (grade: A)