Let the Right One In: A Novel (Paperback) 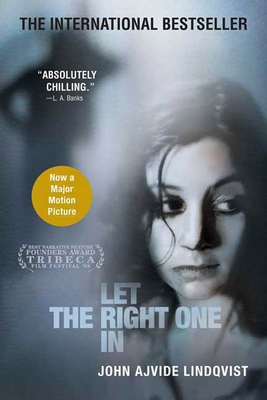 Let the Right One In: A Novel (Paperback)

Let the Right One In Takes Top Honors at Tribeca Film Festival and is now an Award-winning movie in both the U.S. and Sweden!

It is autumn 1981 when inconceivable horror comes to Blackeberg, a suburb in Sweden. The body of a teenager is found, emptied of blood, the murder rumored to be part of a ritual killing. Twelve-year-old Oskar is personally hoping that revenge has come at long last---revenge for the bullying he endures at school, day after day.

But the murder is not the most important thing on his mind. A new girl has moved in next door---a girl who has never seen a Rubik's Cube before, but who can solve it at once. There is something wrong with her, though, something odd. And she only comes out at night. . . .Sweeping top honors at film festivals all over the globe, director Tomas Alfredsson's film of Let the Right One In has received the same kind of spectacular raves that have been lavished on the book. American and Swedish readers of vampire fiction will be thrilled!
Following the success in Sweden, this movie was remade starring Kodi Smit Mcpheem, Chloe Grace Moretz and Richard Jenkins under the new title Let Me In. The story has continued to reach new viewers in a London Musical and the book remains a vampire favorite among its readers.

John Ajvide Lindqvist is the author of Let the Right One In and Handling the Undead. Let The Right One In, his debut novel, was an instant bestseller in Sweden and was named Best Novel in Translation 2005 in Norway. The Swedish film adaptation, directed by Tomas Alfredsson, has won top honors at film festivals all over the globe, including Best Narrative Feature at the Tribeca Film Festival. An American remake, Let Me In, written and directed by Cloverfield director Matt Reeves, was released in October 2010 to rave reviews. Lindqvist grew up in Blackeberg, a suburb of Stockholm and the setting for Let the Right One In. Wanting to become something awful and fantastic, he first became a conjurer, and then was a stand-up comedian for twelve years. He has also written for Swedish television. He lives in Sweden.

Ebba Segerberg is a translator of Swedish literature with a focus on Swedish crime fiction. Her translations include several installments of the Wallander series by Henning Mankell and Let Me In by John Ajvide Lindqvist. She has worked in a variety of other genres and formats including biography, short stories, and screenplays. She holds a PhD in Swedish literature and film studies from the University of California at Berkeley, and currently lives in Saint Louis, Missouri.

“A brilliant take on the vampire myth, and a roaring good story.” —Kelley Armstrong, bestselling author of Haunted

“Absolutely chilling. This page-turner grabs you from the onset and just won't let go. Vampires at their Anne Ricean best!” —L. A. Banks, author of Bite the Bullet and the Vampire Huntress series