Front Row: Anna Wintour: What Lies Beneath the Chic Exterior of Vogue's Editor in Chief (Paperback) 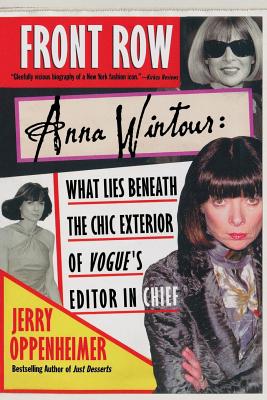 Front Row: Anna Wintour: What Lies Beneath the Chic Exterior of Vogue's Editor in Chief (Paperback)

How did Wintour, who quit school over the length of her hemline, and who had no real writing or communication skills, rise to the pinnacle of the fashion magazine world? Based on scores of interviews with present and former friends and colleagues, Front Row is the scrupulously researched, often shocking life story of this enigmatic icon—a candid portrait of a fashion-obsessed teenager in Swinging Sixties London who claws her way up the ivory tower in New York. It is also an intimate examination of Wintour's personal passions and needs, her loves lost and won, and her feuds and achievements. Anna Wintour's story is an inside look at one of the world's most influential women as well as the catty, competitive bitch-eat-bitch world of fashion. Meow!

JERRY OPPENHEIMER is the New York Times bestselling author of Crazy Rich: Power, Scandal, and Tragedy Inside the Johnson & Johnson Dynasty, as well as unauthorized biographies of Hillary and Bill Clinton, Anna Wintour, Rock Hudson, Martha Stewart, Barbara Walters, Ethel Kennedy, Jerry Seinfeld, and the Hilton family. He has also worked in several different capacities as a journalist, including as an investigative reporter and a producer of television news programs and documentaries.

“The revealing unauthorized biography unveils the Anna Wintour even those closest to her don't know….If you liked The Devil Wears Prada, get your gossip fill with Front Row…we couldn't put it down.” —Complete Woman

“For inquiring minds, it's a juicy, tabloidesque read.” —Houston Chronicle

“A fast-paced biographical romp... Mr. Oppenheimer uses Front Row to ladle out dish—just as he did in Just Desserts, his 1997 biography of Martha Stewart. What he serves up is pretty juicy.” —New York Observer

“Filled with gossip and scandals and peppered with celebrity names and tales…[A] fascinating read about one of the great queen-bee bosses and her mission to determine and define fashion.” —Booklist