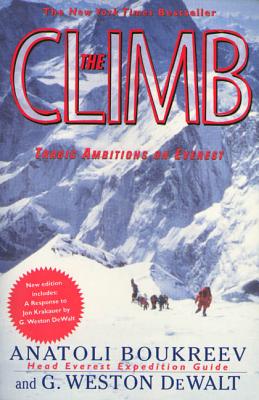 Everest, the major motion picture from Universal Pictures, is set for wide release on September 18, 2015. Read The Climb, Anatoli Boukreev (portrayed by Ingvar Sigurðsson in the film) and G. Weston DeWalt’s compelling account of those fateful events on Everest.

In May 1996 three expeditions attempted to climb Mount Everest on the Southeast Ridge route pioneered by Sir Edmund Hillary and Tenzing Norgay in 1953. Crowded conditions slowed their progress. Late in the day twenty-three men and women-including expedition leaders Scott Fischer and Rob Hall-were caught in a ferocious blizzard. Disoriented and out of oxygen, climbers struggled to find their way down the mountain as darkness approached. Alone and climbing blind, Anatoli Boukreev brought climbers back from the edge of certain death. This new edition includes a transcript of the Mountain Madness expedition debriefing recorded five days after the tragedy, as well as G. Weston DeWalt's response to Into Thin Air author Jon Krakauer.

Anatoli Boukreev was (with G. Weston DeWalt) coauthor of The Climb and a world-renowned high-altitude mountaineer. Twenty-one times he reached the summit of the world's highest mountains. For his heroic actions on Mount Everest in May 1996, he was awarded the American Alpine Club's highest honor, the David A. Sowles Memorial Award.

Anatoli Boukreev was one of the world's foremost high-altitude mountaineers. Twenty-one times he went to the summit of the world's highest mountains. For his heroic actions on Mount Everest in May 1996, he was awarded the American Alpine Club's highest honor, the David A. Sowles Memorial Award. He died in an avalanche while climbing in Nepal on December 25,1997.

“Powerful...a breath of brisk, sometimes bitter clarity...Boukreev did the one thing that denies the void. He took action. He chose danger, and he saved lives.” —The New York Times Book Review

“Compelling...[The Climb] has a ring of authenticity that challenges the slickly written Into Thin Air.” —Minneapolis Star Tribune

“Provocative...compelling reading, both as an adventure and a spiritual reckoning.” —The New Mexican

“The Boukreev that emerges from this book is a thoughtful, articulate, even poetic man whose philosophy of life and mountaineering was uniquely his own.” —Ed Viesters, in The Will to Climb