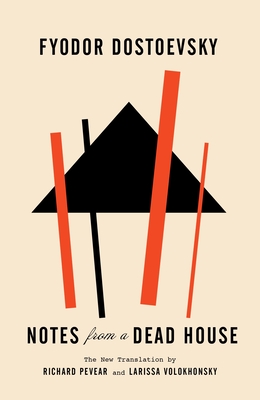 In 1849, Dostoevsky was sentenced to four years at hard labor in a Siberian prison camp for participating in a socialist discussion group. The novel he wrote after his release, based on notes he smuggled out, not only brought him fame, but also founded the tradition of Russian prison writing. Notes from a Dead House (sometimes translated as The House of the Dead) depicts brutal punishments, feuds, betrayals, and the psychological effects of confinement, but it also reveals the moments of comedy and acts of kindness that Dostoevsky witnessed among his fellow prisoners.
To get past government censors, Dostoevsky made his narrator a common-law criminal rather than a political prisoner, but the perspective is unmistakably his own. His incarceration was a transformative experience that nourished all his later works, particularly Crime and Punishment. Dostoevsky’s narrator discovers that even among the most debased criminals there are strong and beautiful souls. His story is, finally, a profound meditation on freedom: “The prisoner himself knows that he is a prisoner; but no brands, no fetters will make him forget that he is a human being.”

Fyodor Mikhailovich Dostoevsky (1821–1881) is best known for the series of novels he wrote in the last twenty years of his life—Notes from Underground, Crime and Punishment, The Idiot, Demons, The Adolescent, and The Brothers Karamazov—which made him one of the major figures of Western literature. These works were all nourished by and partly foreshadowed in Notes from a Dead House (1862), the author’s semifictional account of his own experiences as a political prisoner in Siberia from 1850 to 1854.

Together, Richard Pevear and Larissa Volokhonsky have translated works by Tolstoy, Dostoevsky, Chekhov, Gogol, Bulgakov, and Pasternak. They were twice awarded the PEN/Book-of-the-Month Club Translation Prize (for their versions of Dostoevsky’s The Brothers Karamazov and Tolstoy’s Anna Karenina), and their translation of Dostoevsky’s Demons was one of three nominees for the same prize. They are married and live in France.
“A master of psychological portraiture. . . . A testament to the power of the human will, the way it can marshal patience and imagination and hope.” —The New Criterion

"Excellent. . . . Dostoevsky's constant preoccupation is the meaning of human freedom and the prisoners' preservation of their dignity." —Harper's Magazine

"One of the most harrowingly universal books Dostoevsky ever wrote. . . . It's cause for no small celebration that the extraordinary series of translations by Pevear and Volokhonsky has now seized on Notes from The House of the Dead." —The Buffalo News

"The appearance of any new translation by Richard Pevear and Larissa Volokhonsky is always an event in a literary season. . . . [A] powerful new translation." —Open Letters Monthly

"One of literature's definitive prison memoirs. . . . A classic made current and a welcome addition to the library of Russian literature in translation." —Kirkus Reviews

"Dostoevsky unflinchingly describes the dehumanization of prison, such as the way fetters were not even lifted from the dying, but also conveys how the flame of humanity survives even under such conditions, allowing cleverness and compassion to endure. This new translation is eminently readable." —Publishers Weekly