Livewired: The Inside Story of the Ever-Changing Brain (Paperback) 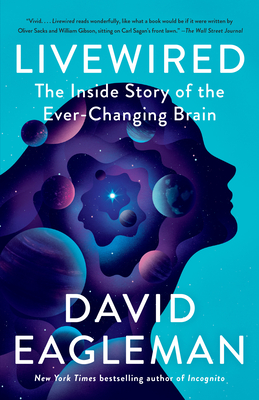 Livewired: The Inside Story of the Ever-Changing Brain (Paperback)


Not On Our Shelves—Ships in 1-5 Days
“Vivid. . . . Livewired reads wonderfully, like what a book would be if it were written by Oliver Sacks and William Gibson, sitting on Carl Sagan’s front lawn.” —The Wall Street Journal

What does drug withdrawal have in common with a broken heart? Why is the enemy of memory not time but other memories? How can a blind person learn to see with her tongue, or a deaf person learn to hear with his skin? Might we someday control a robot with our thoughts, just as we do our fingers and toes? Why do we dream at night, and what does that have to do with the rotation of the earth? The answers to these questions are right behind our eyes. The greatest technology we have ever discovered on our planet is the three-pound organ carried in the vault of the skull. The magic of the brain is not found in the parts it’s made of but in the way those parts unceasingly reweave themselves in an electric, living fabric. In Livewired, you will surf the leading edge of neuroscience atop the anecdotes and metaphors that have made David Eagleman one of the best scientific translators of our generation. Covering decades of research to the present day, Livewired also presents new discoveries from Eagleman’s own laboratory, from synesthesia to dreaming to wearable neurotech devices that revolutionize how we think about the senses.
Dr. DAVID EAGLEMAN is a neuroscientist and internationally best-selling author. He teaches brain plasticity at Stanford University, is the cre­ator and host of the Emmy-nominated television series The Brain, and is the CEO of Neosensory, a company that builds the next generation of neuroscience hardware. The author of seven previous books, Eagleman lives in Silicon Valley in California.

"An altogether fascinating tour of the astonishing plasticity and interconnectedness inside the cranial cradle of all of our experience of reality, animated by Eagleman’s erudite enthusiasm for his subject, aglow with the ecstasy of sensemaking that comes when the seemingly unconnected snaps into a consummate totality of understanding."—Maria Popova, Brain Pickings

"Vivid . . . Since the passing of Isaac Asimov, we haven’t had a working scientist like Mr. Eagleman, who engages his ideas in such a variety of modes. Livewired reads wonderfully like what a book would be if it were written by Oliver Sacks and William Gibson, sitting on Carl Sagan’s front lawn."—Wall Street Journal

"David Eagleman, the Jolly Sherlock Holmes of neuroscience, makes me believe that the universe of possibility required to create utopia is already housed in each of our brains. His knowledge and enthusiasm are intoxicating. His book demonstrates the principle about which he is writing; my mind has been changed by his words."—Russell Brand, Comedian & Activist

"There is much to extract from this fascinating work, that is recommended for readers interested in neuroscience, technology, and the intersection of the two."—Library Journal (starred)

"The pages of Livewired are chockfull of mind bending ideas and dazzling insights. Eagleman's infectious enthusiasm, his use of fascinating anecdotes, and his clear, effortless prose render the secrets of the brain’s adaptability into a truly compelling page-turner. Livewired is a fun and whirlwind exploration of the most complex thing in the universe."—Khaled Hosseini, author of The Kite Runner

"Eagleman brings the subject to life in a way I haven’t seen other writers achieve before.”—Clare Wilson, New Scientist