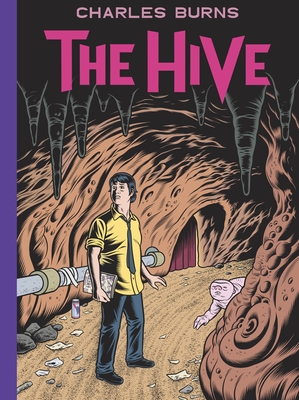 
Special Order—Subject to Availability
From the creator of Black Hole ("The best graphic novel of the year." —Time; "Burns's masterwork." —The New York Times Book Review), the second part of a new epic masterpiece of graphic horror in brilliant, vivid color.

Much has happened since we last saw Doug, the Tintin-like hero from X'ed Out. Confessing his past to an unidentified woman, Doug struggles to recall the mysterious incident that left his life shattered, an incident that may have involved his disturbed and now-absent girlfriend, Sarah, and her menacing ex-boyfriend.

Doug warily seeks answers in a nightmarish alternate world that is a distorted mirror of our own, where he is a lowly employee that carts supplies around the Hive. The second part of Charles Burns's riveting trilogy, this graphic narrative will delight and surpass the expectations of his fans.
CHARLES BURNS grew up in Seattle in the 1970s. His work rose to prominence in Art Spiegelman's Raw magazine in the mid-1980s and took off from there, in an extraordinary range of comics and projects, from Iggy Pop album covers to the latest ad campaign for Altoids. In 1992 he designed the sets for Mark Morris's restaging of The Nutcracker (renamed The Hard Nut) at the Brooklyn Academy of Music. He illustrated covers for Time, The New Yorker, and The New York Times Magazine. He was also tapped as the official cover artist for The Believer magazine at its inception in 2003. Black Hole received Eisner, Harvey, and Ignatz awards in 2005. Burns lives in Philadelphia with his wife and two daughters.
Praise for The Hive:

“Burns’s oeuvre is frequently cited as ‘strange,’ but that’s perhaps oversimplifying a world more thought-provokingly described as recognizably like our own, except for when it’s not—and it’s the difference between the two where Burns’s power to shine a light on the darker side of human nature lies…the result will stick with readers long after being absorbed.” –Publishers Weekly, starred review

“The Hive is a tour-de-force of psychedelic storytelling, an astonishing piece of graphic literature that combines strange characters, even stranger situations and locales, and multi-leveled narratives in a way you have never seen before on the page. Burns’ work is utterly unique, and he has no fear about experimenting and trying to engage the reader in new ways. Perhaps his greatest gift is finding a way to make you find empathy for people and things that you would normally find off-putting or disgusting. Burns is one of the few talents who stands above the medium, and deservedly so. Easily one of the finest works you’ll see this year.” –Comics Waiting Room

“As if the introduction to this series wasn’t hallucinatory enough, this second installment will leave initiates feeling significantly disoriented. And perhaps that’s part of the point, as Burns blurs the distinctions within this anti-narrative among comic books, reality, drugs, masks, nightmare and identity…A very creative artist lets his imagination loose in the middle of somewhere, where only the most adventurous lovers of graphic narrative might dare to tread.” –Kirkus

“Burns’ clean, highly refined style contributes to an unnerving reading experience when reconciled with the slippery, seething and roiling quality of a story as it’s taking place—on multiple levels of consciousness, timeframes and planes of existence…Burns is making us slow down and savor this morsel of brilliance in a timeframe that starts to even out the ratio of writing time to reading time. If that’s vindication for an author—one whose visual style incorporates thousands of beautiful hash marks, each tapered perfectly with a tiny brush—then I’m all for it.” –The Comics Journal

“If you want to play against type and give a completely nonholiday gift for the holidays, wrap up a copy of Charles Burns’s The Hive. It’s a creepy tour de force, weaving together layers of paranoid nightmares, and a sequel to Burns’s X’ed Out. It’s as though the tenants of Ware’s townhouse all dropped bad acid at the same time, and Burns’s drawing delivers the horror in full-color, palm-sweating detail, complete with armies of maggots, sadistic lovers, and desolate underground factories patrolled by foul-mouthed alien overlords. Not a stocking stuffer for the little ones.” –Boston Globe gift guide

“Intelligent, carefully crafted and emphatically not for everyone.” –Paste Magazine

“The beautifully disturbing, non-linear tale leaps effortlessly between the real and unreal. Though in this installment, the lines further blur as elements from the bizarrely apocalyptic reality and the ‘normal’ collide. Inspired equally by the works of Hergé and William Burroughs, Burns once again provides one of the best graphic novels of the year.” –Nexus Graphica Top Ten

Praise for X'ed Out:

"Terrifically creepy . . . I loved every second of this book." —Boing Boing

"Burns's comics are fluid, smooth and as solidly built as a vintage TV set, but they shudder with the chill of the uncanny." —The New York Times Book Review

"A surrealistic, often horrifying book . . . a Tintin homage for grown-ups." —The Stranger

"A fantastic meta-reality where Burns' spastic yet tightly reined imagination is allowed to feed on itself deliciously." —AV Club, "A" review

"Taps into the archive of gothic and grotesque imagery . . . What's dormant inside of Tintin—the abject fear that Hergé rarely acknowledges—X'ed Out brings to life." —The Comics Journal

"Cause for celebration . . . a visual feast as much as a literary one, and it dwells in the mind long after the final pages have turned." —Culture Mob