The Hard Way Around: The Passages of Joshua Slocum (Vintage Departures) (Paperback) 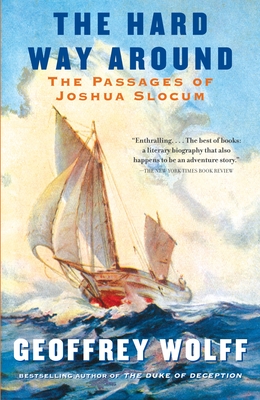 The Hard Way Around: The Passages of Joshua Slocum (Vintage Departures) (Paperback)

In 1895 Joshua Slocum set sail from Gloucester, Massachusetts, in the Spray, a thirty-seven-foot sloop. More than three years later, he became the first man to circumnavigate the globe solo, and his account of that voyage, Sailing Alone Around the World, made him internationally famous. But scandal soon followed, and a decade later, with his finances failing, he set off alone once more—never to be seen again.

In this definitive portrait of an icon of adventure, Geoffrey Wolff describes, with authority and admiration, a life that would see hurricanes, shipwrecks, pirate attacks, cholera, smallpox, and no shortage of personal tragedy.

Geoffrey Wolff is the author of five works of nonfiction and six novels. In 1994 he received the Award in Literature from the American Academy of Arts and Letters. He lives in Bath, Maine.

“Enthralling. . . . Adroitly and economically told. . . . The best of books: a literary biography that also happens to be an adventure story.”
—The New York Times Book Review

“A rich portrait. . . . A fascinating true story.”
—The Seattle Times

“As one would expect from Geoffrey Wolff, The Hard Way Around is an engrossing and energetically written life of a very tricky and complex character. Slocum has at last met, in the author of The Duke of Deception, the biographer he has long deserved.”
—Jonathan Raban, author of Passage to Juneau

“Wolff captures the extraordinary life and nature of the man who in 1908 set sail from Martha's Vineyard for the Amazon and disappeared without trace.”
—The Boston Globe

“Concise. . . . Wolff holds a straight course in describing a solo sailor.”
—The Oregonian

“Wolff’s book, written in muscular, academic prose, fills in the gaps [and] focuses on the legend at the peak of his powers.”
—Outside Magazine

“Hugely entertaining and informative. In an era of teenage sailors routinely circumnavigating the world within a safety net of satellite phones, GPS navigation, emergency call beacons and corporate sponsorship, Wolff skillfully illuminates, celebrates and further burnishes the eccentric life and legacy of Joshua Slocum—master of tall ships and The North Star of solo travelers.”
—Eric Hansen, author of Stranger in the Forest

“Exhilarating. . . . A rewarding tale of life on the high seas.”
—Kirkus Reviews