How to Survive a Plague: The Story of How Activists and Scientists Tamed AIDS (Paperback) 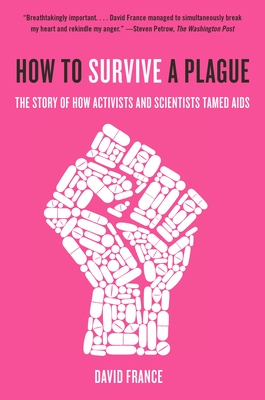 How to Survive a Plague: The Story of How Activists and Scientists Tamed AIDS (Paperback)


On Our Shelves Now at:
One of Entertainment Weekly's Top 10 Nonfiction Books of the Decade

A definitive history of the successful battle to halt the AIDS epidemic, here is the incredible story of the grassroots activists whose work turned HIV from a mostly fatal infection to a manageable disease. Almost universally ignored, these men and women learned to become their own researchers, lobbyists, and drug smugglers, established their own newspapers and research journals, and went on to force reform in the nation’s disease-fighting agencies. From the creator of, and inspired by, the seminal documentary of the same name, How to Survive a Plague is an unparalleled insider’s account of a pivotal moment in the history of American civil rights.
DAVID FRANCE is the author of Our Fathers, a book about the Catholic sexual abuse scandal, which Showtime adapted into a film. He coauthored The Confessionwith former New Jersey governor Jim McGreevey. He is a contributing editor for New York and has written as well for The New York Times. His documentary film How to Survive a Plague was an Oscar finalist, won a Directors Guild Award and a Peabody Award, and was nominated for two Emmys, among other accolades. His book of the same title won a Baillie Gifford Prize, a Green Carnation Prize, the Israel Fishman Nonfiction Award, a Lambda Literary award, the Randy Shilts Award, and a National Lesbian & Gay Journalist Association award for excellence in HIV/AIDS coverage. It was shortlisted for the Andrew Carnegie Medal for Excellence and the Wellcome Prize in Literature. The author lives in New York City.

“Inspiring. We owe so much to those brave activists and to Mr. France for writing this vital book.” —Anderson Cooper, The Wall Street Journal

“France delivers a monumental punch in the gut; his book is as moving and involving as a Russian novel. . . . An intimate, searing memoir and a vivid, detailed history.” —The Washington Post

“So real to someone who witnessed it that I had to put this volume down and catch my breath.” —Andrew Sullivan, The New York Times Book Review

“A remarkably written and highly relevant record of what angry, invested citizens can come together to achieve, and a moving and instructive testament to one community’s refusal—in the face of ignorance, hatred and death—to be silenced or to give up.” —Chicago Tribune