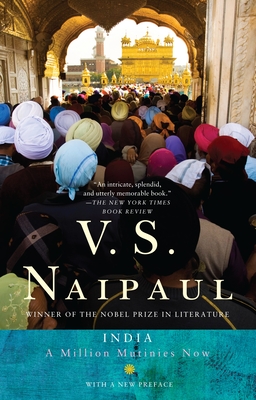 Nobel laureate V. S. Naipaul’s impassioned and prescient travelogue of his journeys through his ancestral homeland, with a new preface by the author.

Arising out of Naipaul’s lifelong obsession and passion for a country that is at once his and totally alien, India: A Million Mutinies Now relates the stories of many of the people he met traveling there more than fifty years ago. He explores how they have been steered by the innumerable frictions present in Indian society—the contradictions and compromises of religious faith, the whim and chaos of random political forces. This book represents Naipaul’s last word on his homeland, complementing his two other India travelogues, An Area of Darkness and India: A Wounded Civilization.
V.S. NAIPAUL was born in Trinidad in 1932. He came to England on a scholarship in 1950. He spent four years at University College, Oxford, and began to write, in London, in 1954. He pursued no other profession.

His novels include A House for Mr Biswas, The Mimic Men, Guerrillas, A Bend in the River, and The Enigma of Arrival. In 1971 he was awarded the Booker Prize for In a Free State. His works of nonfiction, equally acclaimed, include Among the Believers, Beyond Belief, The Masque of Africa, and a trio of books about India: An Area of Darkness, India: A Wounded Civilization and India: A Million Mutinies Now.

In 1990, V.S. Naipaul received a knighthood for services to literature; in 1993, he was the first recipient of the David Cohen British Literature Prize. He received the Nobel Prize in Literature in 2001. He lived with his wife Nadira and cat Augustus in Wiltshire, and died in 2018.
A New York Times Notable Book

“Warm, human, rich with a cacophony of Indian voices, India: A Million Mutinies Now is about the passions and tragedies of a nation caught between the rush of modernity and the power of tradition. . . . An indispensable book for understanding India at the end of the 20th century.”
—The Washington Post

“Brilliantly penetrating and shrewd. . . . Each story, evoked by Naipaul’s sensitive and nuanced probing, reflects complexities and contradictions and gives us a glimpse, however tiny, of the mosaic totality that comprises India.”
—The Chicago Tribune

“Beautifully written, intellectually satisfying. . . . Naipaul is a rare combination of born narrator, who brings to life the places and people he encounters.”
—Foreign Affairs

“Compassionate. . . . Leaves the reader with a powerful sense of [a] people’s dedication, perseverance and passion.”
—The New York Times

“Travel writing, history, novel, lyric—Naipaul’s book partakes of the excellence of every category and fulfills itself in one of the oldest and rarest of forms—prophecy. It bears witness, in unforgettable language, to the best of hopes in the worst of times.”
—The Christian Science Monitor

“Naipaul has retired the familiar, infuriating, immobile face of India and painted a fresh one of human spirit and dramatic change.”
—Time

“A shifting kaleidoscope of images of a country almost impossible to imagine, but made more comprehensible due to Naipaul’s formidable intelligence and prodigious narrative gifts.”
—Boston Sunday Herald

“Naipaul creates his India slowly, through whole life-stories told in the characters’ own voices. . . . The detail is wonderful, built up with impeccable care.”
—The Economist

“[Naipaul] has invaluably revealed the brink on which India now stands, the sources of all that rage and all those little mutinies. . . . There is a powerful feeling of change in this book.”
—Los Angeles Times

“Compelling, almost hypnotic. . . . A rich, multilayered portrait of a nation we know far too little about in the West. You will feel you have learned much about India, yet you will sense how much more—how very much more—remains to be learned.”
—Seattle Times

“There is a great temptation to quote too much of Naipaul, for in reading the novelist, essayist and travel writer we realize the accuracy of those who consider him one of the finest writers in the language; a man with intense intellectual curiosity, as well as an inherited sympathy for inhabitants of the Third World.”
—The Oregonian

“A superb raga of a book, a raga of morning curiosity and evening meditation. . . . This may be [Naipaul’s] most generous work, and his best non-fiction.”
—The San Diego Union-Tribune

“An absorbing journey through the mind of India. . . . Mutinies will surprise those who have read and ranted at Naipaul’s earlier books on India.”
—St. Petersburg Times

“In-depth. . . . Beautifully written, this book gives a personal look at the societal and political forces pushing for change in the country.”
—Minneapolis Star Tribune

“Prescient. . . . Naipaul’s intuitions and indefatigable on-the-spot research were well ahead of the academic reaction. . . . [He is] a writer who will always be read—and not just by academics—for his intelligence and insight and for the clarity and elegance of his style.”
—The Times Higher Education Supplement

“One of the most intelligent writers of our time. . . . Naipaul’s word-pictures of India are lyrical, spare, precise and vivid. . . . He succeeds—brilliantly—in integrating India’s individual truths with a larger picture of the country.”
—The Toronto Star