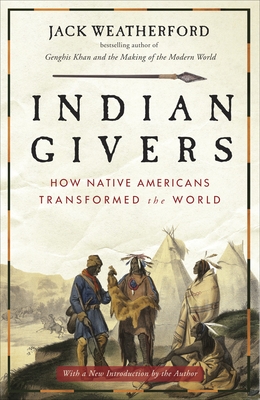 
Not On Our Shelves—Ships in 1-5 Days
An utterly compelling story of how the cultural, social, and political practices of Native Americans transformed the way life is lived throughout the world, with a new introduction by the author

“As entertaining as it is thoughtful . . . Few contemporary writers have Weatherford’s talent for making the deep sweep of history seem vital and immediate.”—The Washington Post

After 500 years, the world’s huge debt to the wisdom of the Native Americans has finally been explored in all its vivid drama by anthropologist Jack Weatherford. He traces the crucial contributions made by the Native Americans to our federal system of government, our democratic institutions, modern medicine, agriculture, architecture, and ecology, and in this astonishing, ground-breaking book takes a giant step toward recovering a true American history.
Jack Weatherford is The New York Times bestselling author of Genghis Khan and the Making of the Modern World, Indian Givers: How the Indians of the Americas Transformed the World, The Secret History of the Mongol Queens, and The History of Money, among other acclaimed books. A specialist in tribal peoples, he was for many years a professor of anthropology at Macalaster College in Minnesota and divides his time between the United States and Mongolia.