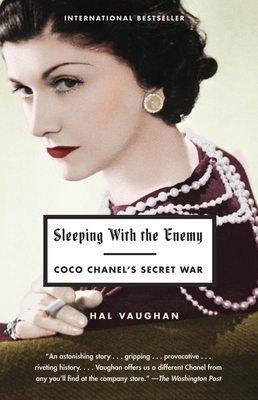 
Not On Our Shelves—Ships in 1-5 Days
This explosive narrative reveals for the first time the shocking hidden years of Coco Chanel’s life: her collaboration with the Nazis in Paris, her affair with a master spy, and her work for the German military intelligence service and Himmler’s SS.

Gabrielle “Coco” Chanel was the high priestess of couture who created the look of the modern woman. By the 1920s she had amassed a fortune and went on to create an empire. But her life from 1941 to 1954 has long been shrouded in rumor and mystery, never clarified by Chanel or her many biographers. Hal Vaughan exposes the truth of her wartime collaboration and her long affair with the playboy Baron Hans Günther von Dincklage—who ran a spy ring and reported directly to Goebbels. Vaughan pieces together how Chanel became a Nazi agent, how she escaped arrest after the war and joined her lover in exile in Switzerland, and how—despite suspicions about her past—she was able to return to Paris at age seventy and rebuild the iconic House of Chanel.

Hal Vaughan has been a newsman, foreign correspondent, and documentary film producer working in Europe, the Middle East, and Southeast Asia since 1957. He served in the U.S. military in World War II and Korea and has held various posts as a U.S. Foreign Service officer. Vaughan is the author of Doctor to the Resistance: The Heroic True Story of an American Surgeon and His Family in Occupied Paris and FDR’s 12 Apostles: The Spies Who Paved the Way for the Invasion of North Africa. He lives in Paris.
“[Hal Vaughan] ably demonstrates that Chanel was far from an innocent victim of circumstance during the second world war but a fully fledged Abwehr (German secret service) agent with her own number and codename: Westminster (no doubt a nod to her one-time lover, the Duke of Westminster).  . . Vaughan, who writes with welcome economy and flair, deserves a lot of credit for finally unraveling the strands of Chanel’s deeply deceptive personality.”
—Tobias Grey, Financial Times

“[Sleeping with the Enemy] distinguishes itself from the many other Chanel biographies by tackling the dicey subject of Gabrielle Chanel’s activities during World War II . . . This is a frank and unsentimental portrait of a figure that fashion writers are nearly incapable of criticizing. .  . While Vaughan’s discussions of Chanel’s contributions to fashion add nothing new to the extensive literature on her, he more than makes up for it with his impressive research and the never-before-seen information that he has unearthed about her wartime activities. . . . What Sleeping with the Enemy offers is a more rounded look at a figure who has been over-studied and under-examined.”
—Isabel Schwab, The New Republic online

“[A] compelling chronicle of Coco Chanel . . . a different Chanel from any you’ll find at the company store . . . by no means the account of an emerging style but a tale of how a single-minded woman faced history, made hard choices, connived, lied, collaborated and used every imaginable wile to survive and see that the people she cared about survived with her . . . Vaughan has gleaned many of the details of Chanel’s collaboration from documents that were scattered for years throughout European archives . . . It’s an astonishing story . . gripping . . . provocative . . . riveting history.”
—Marie Arana, The Washington Post

“Chanel’s war years, as explored by Hal Vaughan, are as camera-ready and as neck-deep in melodrama as Quentin Tarantino’s “Inglourious Basterds,” and just as hard to forget now that they’re exposed.”
—David D’Arcy, San Francisco Chronicle

"Hal Vaughan has done a stupendous job of research . . . Vaughan draws a brilliant portrait . . a terrific and fascinating story. . . wonderfully told, and full of great characters. . . Vaughan brings her to life so vividly that we understand why no less a judge than André Malraux said that "from this century in France only three names will remain: de Gaulle, Picasso, and Chanel.". . . It is that rarest of good reads, a biography about a famous person with a surprise on every page. Nancy Mitford, I think, would have loved it, and written a wonderful letter to Evelyn Waugh about it!"
—Michael Korda, The Daily Beast