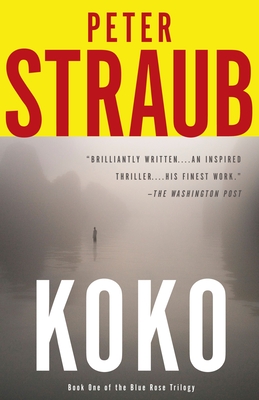 This is book number 1 in the Blue Rose Trilogy series.

Bestselling author Peter Straub's Koko is a gripping psychological thriller in which horror and paranoia are indistinguishable from reality.Koko. Only four men knew what it meant. Now they must stop it. They were Vietnam vets-a doctor, a lawyer, a working stiff, and a writer. Very different from each other, they are nonetheless linked by a shared history and a single shattering secret. Now, they have been reunited and are about to embark on a quest that will take from Washington, D.C., to the graveyards and fleshpots of the Far East to the human jungle of New York, hunting someone from the past who has risen from the darkness to kill and kill and kill.
Peter Straub is the New York Times bestselling author of more than a dozen novels. His most recent novel was In the Night Room. He lives in New York City.
“Brilliantly written.... An inspired thriller.... His finest work.” —The Washington Post“A masterpiece of terror.” —Los Angeles Times“Completely plotted, thickly layered evil.... The ultimate horror.” —The New York Times Book Review“A dead-center hit. . . . A gripping, enthralling, nonstop read.” —San Francisco Chronicle