Hellhound On His Trail: The Electrifying Account of the Largest Manhunt In American History (Paperback) 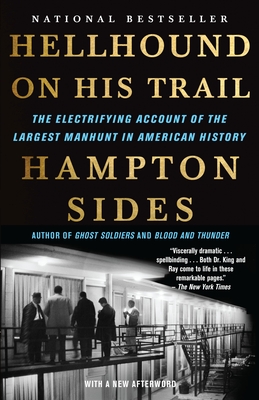 Hellhound On His Trail: The Electrifying Account of the Largest Manhunt In American History (Paperback)

“This fast paced narrative tells the story of Eric Galt, prisoner #416J, otherwise known as James Earl Ray, the assassin of Martin Luther King, Jr. A non-descript, forgettable man obsessed with becoming someone, Ray weasels in and out of society with ease, taking down the most memorable man of the civil rights movement in his path. As the most intense manhunt ever carried out by the FBI is underway, Ray continues to blend and scurry for cover, leaving a trail throughout the United States, Canada and England. Fascinating, full of descriptive detail, this is a sad portrayal of the mighty taken down by the meek.”
— Kristin Bates, McLean & Eakin Booksellers, Petoskey, MI

NATIONAL BESTSELLER • On April 4, 1968, James Earl Ray shot Martin Luther King Jr. at the Lorraine Motel. The nation was shocked, enraged, and saddened. As chaos erupted across the country and mourners gathered at King's funeral, investigators launched a sixty-five day search for King’s assassin that would lead them across two continents.

With a blistering, cross-cutting narrative that draws on a wealth of dramatic unpublished documents, Hampton Sides, bestselling author of Ghost Soldiers, delivers a non-fiction thriller in the tradition of William Manchester's The Death of a President and Truman Capote's In Cold Blood. With Hellhound On His Trail, Sides shines a light on the largest manhunt in American history and brings it to life for all to see.

With a New Afterword

A native of Memphis, Hampton Sides is an award-winning editor of Outside and the author of the bestselling histories Blood and Thunder and Ghost Soldiers. He lives in New Mexico with his wife, Anne, and their three sons.

"Viscerally dramatic … spellbinding … Both Dr. King and Ray come to life in these remarkable pages. " —The New York Times

“Impossible-to-put-down . . . a masterful work of narrative nonfiction, no one does it better than Hampton Sides.” —Associated Press

"Gripping, exciting, and engrossing . . . hits us with the shuddering intensity of a high-speed collision." —The Times of London

"A taut, vibrant account....chilling in detail and particularly haunting in evoking the confusion and pathos in the minutes following the single crack of Ray's rifle." —Los Angeles Times

"An authoritative, engrossing narrative....thoroughly researched but executed with the pacing of a fine novel and a dash of top-notch police procedural....meticulous."--Miami Herald

"Searing. . . . A complex crime mystery that shifts the focus from Dr. King to his killer. . . . Gripping."--Wall Street Journal

"As urgent a page-turner as any crime novel — a feat Sides accomplishes without sacrificing historical detail and insight." --St. Petersburg Times

“Remarkable. . . . A window on the passions and contradictions of an era....a page-turner."--Christian Science Monitor

"A riveting re-creation of a tragedy. . . . Through Sides’ use of novelistic pacing, details and descriptions, he creates suspense that will propel readers through a slice of history."--USA Today

"Enlightening . . . a valuable contribution to the historical record [and] a memorable and persuasive portrait." --The Washington Post

"Meticulously researched, reads like nothing so much as a novel ... creating plenty of plain old-fashioned suspense that makes the reader's heart pound."--The Portland Oregonian

"It's as much thriller as history book and the compulsive story races along like a fugitive on the lam."--San Francisco Gate

"Sides' meticulous yet driving account of Ray's plot to murder King and the 68-day international manhunt that followed is in essence a true-crime story and a splendid specimen of the genre—a genuine corker.”--Salon

"Hellhound unfolds like a mystery--one read not for the ending but for all the missteps, gotchas and near misses along the way."--Time

"Exhaustively researched, fast-paced and at times minute-by-minute telling....To Sides' great credit, this is a feat of shoe-leather reporting and research....astonishing....briskly alive."--Austin American Statesman

"Meticulous....a page turner, and something more: It brings the disquiet of an era fully alive."—Bloomberg

"[Sides] masterfully recreates the assassination of Martin Luther King Jr ....Though the outcome is clear, we are nonetheless rapt—and then devastated."--Time Out New York