Physics of the Impossible: A Scientific Exploration into the World of Phasers, Force Fields, Teleportation, and Time Travel (Paperback) 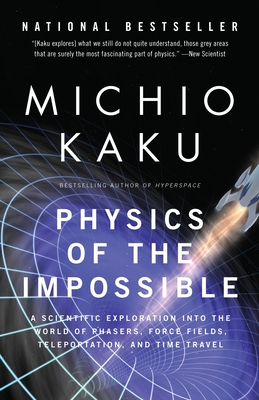 Physics of the Impossible: A Scientific Exploration into the World of Phasers, Force Fields, Teleportation, and Time Travel (Paperback)


Backordered
Teleportation, time machines, force fields, and interstellar space ships—the stuff of science fiction or potentially attainable future technologies? Inspired by the fantastic worlds of Star Trek, Star Wars, and Back to the Future, renowned theoretical physicist and bestselling author Michio Kaku takes an informed, serious, and often surprising look at what our current understanding of the universe's physical laws may permit in the near and distant future.

Entertaining, informative, and imaginative, Physics of the Impossible probes the very limits of human ingenuity and scientific possibility.
MICHIO KAKU is a professor of physics at the City University of New York, cofounder of string field theory, and the author of several widely acclaimed science books, including Hyperspace, Beyond Einstein, Physics of the Impossible, and Physics of the Future. He is the science correspondent for CBS's This Morning and host of the radio programs Science Fantastic and Explorations in Science.
“[Kaku explores] what we still do not quite understand, those grey areas that are surely the most fascinating part of physics.” —New Scientist

“Kaku's latest book aims to explain exactly why some visions of the future may eventually be realized while others are likely to remain beyond the bounds of possibility. . . . Science fiction often explores such questions; science falls silent at this point. Kaku's work helps to fill a void.” —The Economist

“A fascinating exploration of the interface between science and science fiction, extremely well researched, lively, and tremendously entertaining." —Fritjof Capra, author of The Tao of Physics and The Science of Leonardo

“Mighty few theoretical physicists would bother expounding some of these possible impossibilities, and Kaku is to be congratulated for doing so. . . . [He gets] the juices of future physicists flowing.” —Los Angeles Times