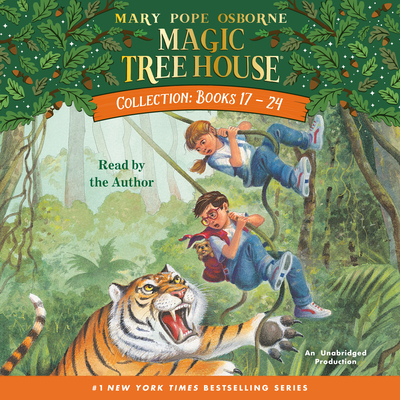 This is book number 9 in the Magic Tree House (R) series.

BOOK #17: TONIGHT ON THE TITANIC: Jack and Annie are whisked away to the decks of the Titanic, where they must help two children find their way to a lifeboat - and are in danger of becoming victims of that tragic night themselves.

BOOK #18: BUFFALO BEFORE BREAKFAST: Jack and Annie travel to the Old West, where they roam the Great Plains with a Lakota boy.

BOOK #19: TIGERS AT TWILIGHT: While in India, Jack and Annie have adventures involving a tiger and other endangered jungle animals.

BOOK #20: DINGOES AT DINNERTIME: Jack and Annie are whisked Down Under to the land of Australia, where they save several animals from a raging wildfire.

BOOK #21: CIVIL WAR ON SUNDAY: Jack and Annie are transported to the time of the Civil War, where they meet Clara Barton.

BOOK #22: REVOLUTIONARY WAR ON WEDNESDAY: Jack and Annie travel back to the time of the American Revolution and help Gen. George Washington during his famous crossing of the Delaware River.

BOOK #23: TWISTER ON TUESDAY: Jack and Annie travel back to the Kansas prairie and gain an understanding of how hard life was for pioneers when they experience the terror of a tornado.

BOOK #24: EARTHQUAKE IN THE EARLY MORNING: The Magic Tree House takes Jack and Annie to San Francisco in 1906, in time for them to experience one of the biggest earthquakes the United States had ever known.
MARY POPE OSBORNE is the award-winning author of over forty books for young people, including American Tall Tales, the Spider Kane mystery books, and One World, Many Religions, an Orbis Pictus honor book. She served two terms as president of the Author's Guild, the leading writers' organization in the United States.