The Recruiter: Spying and the Lost Art of American Intelligence (Hardcover) 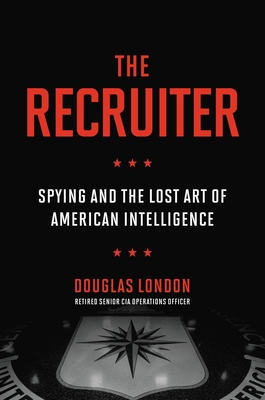 The Recruiter: Spying and the Lost Art of American Intelligence (Hardcover)


In Stock—Click for Locations
This revealing memoir from a 34-year veteran of the CIA who worked as a case officer and recruiter of foreign agents before and after 9/11 provides an invaluable perspective on the state of modern spy craft, how the CIA has developed, and how it must continue to evolve.

If you've ever wondered what it's like to be a modern-day spy, Douglas London is here to explain. London’s overseas work involved spotting and identifying targets, building relationships over weeks or months, and then pitching them to work for the CIA—all the while maintaining various identities, a day job, and a very real wife and kids at home.

The Recruiter: Spying and the Lost Art of American Intelligence captures the best stories from London's life as a spy, his insights into the challenges and failures of intelligence work, and the complicated relationships he developed with agents and colleagues. In the end, London presents a highly readable insider’s tale about the state of espionage, a warning about the decline of American intelligence since 9/11 and Iraq, and what can be done to recover.
Douglas London is a retired Senior CIA Operations Officer, an Adjunct Associate Professor at Georgetown University's Center for Security Studies, and a Non-resident fellow at the Middle East Institute.  He served predominantly in the Middle East, South and Central Asia, and Africa, including three assignments as a Chief of Station, the President’s senior intelligence officer at post, and Chief of Base in a conflict zone. Assignments at CIA Headquarters included executive positions at CIA's Counterterrorism Center, Information Operations Center, and Near East and South Asia Division. London was decorated with the CIA’s Career Intelligence Medal, the McCone Award, and multiple unit and individual citations.
"Want to know what it’s like to recruit foreign agents for the Central Intelligence Agency? Douglas London gives us a revealing look behind the curtain into the inner workings of America’s constantly evolving spy organization. As a thirty-four-year veteran of the Agency, seventeen years on either side of 9/11, Douglas is uniquely positioned to provide perspective on the CIA’s shift in focus from classified intelligence gathering to policy making to paramilitary operations to the political weaponization of intelligence. A fascinating and important read for us all."—Jack Carr, Navy SEAL Sniper and #1 New York Times bestselling author of The Devil’s Hand

“The Recruiter shares many great episodes from London’s life in the National Clandestine Service, excellent insights into the challenges and intricacies of intelligence work, and thoughtful accounts of the complicated relationships he developed with agents and colleagues. In the end, London presents a superb insider’s tale about the state of espionage, the challenges that American intelligence has experienced since 9/11 and Iraq, and what needs to be done in the coming years to ensure that America's intelligence agencies can provide our country's national security team with the intelligence they need.”
—General David Petraeus (Ret.), former Director of the CIA

"Douglas London draws the reader deeply into the world of CIA operations officers and in his well-written, clear-eyed account he sheds considerable light on the hitherto murky world of CIA operatives in the field. It is a fascinating read."—Peter Bergen, author of The Rise and Fall of Osama bin Laden

“The Recruiter is the most important book about the CIA in years. London warns that the core mission of espionage—gathering intelligence through the recruitment of foreign agents—has been swamped by counterterrorism and paramilitary missions. That constitutes a clear and present danger to the United States.”—Tim Weiner, author of The Folly and the Glory: America, Russia, and Political Warfare, 1945–2020

"Recommended for all espionage enthusiasts."—Alma Katsu, author of The Hunger and The Deep

“The Recruiter is one of the most interesting spy memoirs in a long time, filled with fascinating insights into a life convincing people to betray their country. Also an unflinching critique of the unsavory side of CIA culture.”—Ken Dilanian, NBC News

“Always read about spies written by spies.”—Tom Nichols, contributing writer at The Atlantic and author of the Peacefield newsletter

“Riveting…London has written a scorching portrait of what he sees as decades of CIA mismanagement, from a failure to prevent terrorist attacks on Americans abroad and at home, to not foreseeing the so-called Arab Spring or the rise of the Islamic State terrorist group until it was too late.  He describes how some of these senior officials made serious mistakes.”—SpyTalk

“A rich and candid look at the lives of CIA Operations Officers… providing also a critique of the current state of the Agency….London’s book provides a much needed, if complicated, look at what it takes to live and operate forever in the shadows….The Recruiter weaves together a number of fascinating threads to form a tapestry of human intelligence today….That London was able to get this book through the Agency’s review board is a miracle in and of itself. From the hiring and vetting of a potential professional trainee, through to their time on the “Farm” (the Agency’s Virginia training location) and onto their first overseas rotations, London offers the reader rich anecdotes from his own time as a new hire….The richness of London’s book is in these stories, which are raw and real, and highlight both the highs and lows of the life of an Operations Officer. It is rare that one sees the latter or hears about the challenges of a life abroad undercover….[I]nteresting core arguments about the state of the Agency at a policy-level, arguments which fully form by the end of the book….On finishing The Recruiter one can’t help but feel as though they’ve been recruited, in a way.”
—The Diplomatic Courier

“Many of us have wondered what it would be like to be a real spy….There could possibly be no better book to take us deep into this world than the latest release by Douglas London, titled The Recruiter: Spying and the Lost Art of American Intelligence….London… shares highly personal and courageous details in this memoir, which makes for such a fascinating read.”—Robert Amsterdam, “Departures” podcast

"Broad-ranging, thoughtful, [London's] reflected on his career and the changes the agency [he] worked for has [gone] through."—SpyCraft podcast, The Spy Museum

"Thoroughly enjoyed The Recruiter by Douglas London. Fascinating insights into life of [a] CIA
case officer from ground up--surveillance detection, cover, agent handling, liaison relationships, raising a family in a clandestine life, and how to persuade someone to betray their country."—First Casualty: The Untold Story of the CIA Mission to Avenge 9/11

“Douglas London’s The Recruiter is a rare treat, a book that captures the essence of intelligence work….The rewards of London’s career do not blind him to the reality of the world in which he moved. He can see his own agency with a clear eye, and his worm’s-eye view of the CIA post-9/11 makes for a sobering read….London is a smart, persuasive, and charming guide to what, for most people, is a hidden world.”—The Jewish Review of Books