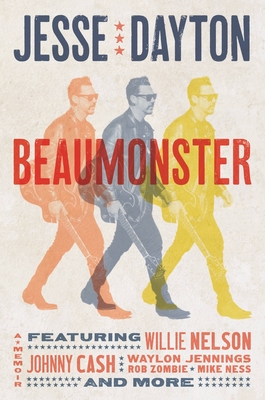 A BEHIND-THE-SCENES LOOK AT THE ADVENTURES OF FIRST-RATE STORYTELLER, GUITARIST, AND RELENTLESS ROAD WARRIOR JESSE DAYTON

Jesse Dayton’s story reads like a who’s who of American music. In his debut memoir Beaumonster, Dayton reveals the stranger-than-fiction encounters and outlandish experiences that have ensued across his wide-ranging career. After sneaking into night clubs to play gigs in his youth, eighteen-year-old Dayton and his trio began packing clubs and theaters across Houston, Dallas, and Austin. His first solo record which featured great luminaries like Doug Sahm, Flaco Jiménez, and Johnny Gimble, hit number one on the Americana radio charts and then he was off to the races— touring the world solo and with punk legends Social Distortion and the Supersuckers. While doing press in Nashville, he caught the attention of Waylon Jennings and was whisked off to Woodland Studios, where he was greeted by none other than Johnny Cash, who told Dayton, “We’ve been waiting for you.”

Since then, Dayton’s ride across the entertainment industry, traversing genres and formats, has only gotten wilder. Whether it’s playing guitar on records and film with the likes of Cash, Ray Price, Willie Nelson, Johnny Bush, Glen Campbell and Duff McKagan; writing and recording soundtracks for horror director/rockstar Rob Zombie; directing Malcolm McDowell and Sid Haig in his own horror movie; filling in for the iconic punk band X’s guitarist; joining Ryan Bingham on tour; or the many solo and guest projects he continues to work on, Dayton is down to leave his mark, making Beaumonster a uniquely entertaining tale that will impress new and old fans alike.

Jesse Dayton is a creative tour de force. He is a multi-genre guitarist, singer and songwriter, film writer and director, radio personality, and author. Along with a thriving solo career, Dayton has worked with the biggest legends in Country, Punk, Americana and Alternative genres. This is his first book. Born and raised in Beaumont, Texas, Dayton is now a long time resident of Austin.
“Jesse has found an amazing and clear-cut writing voice to take us all on his epic journey. The talent this man has makes things like guitar playing (ripping, actually!), singing, and writing scripts and books seem effortless. You’ll find in these pages the preparation and hard work that has gone into the ‘making’ of a badass. Jesse Dayton is that . . . A true American bad motherf*cker.”—Duff McKagan of Guns N’ Roses, author of It’s So Easy and How to Be a Man

“Jesse’s Beaumonster is the friend you wanna hang out with: fun, smart, entertaining and definitively cool. If you like good writing and good stories, right here’s your next book.”—Kathy Valentine, author of All I Ever Wanted: A Rock n’ Roll Memoir and member of the Go-Go’s

“Jesse Dayton is the heart and soul of hillbilly rock ’n’ roll. The Beaumont badass is makin’ George Jones and the Big Bopper proud! Rave on you crazy and free hellraiser.”—Mojo Nixon, musician, actor, and radio personality

“Beaumonster is a rib-spreader. It opens up and lays bare the unique talent, the absurd luck, and breathtaking heartbreak that’s been Jesse Dayton’s life. But more than that, it’s a testimonial to the beauty one can create with persistence, stubbornness, and a little bit of audacity.”—Danny Bland, Tour manager, haikuist and author of In Case We Die

“So many artists strive to be original—Jesse Dayton just is. He wowed Waylon Jennings and Johnny Cash with his guitar playing, toured with punk greats Social Distortion and X, and cultivated a wildly diverse fanbase of country hell-raisers, intellectual anarchists, and rockabilly dreamers along the way. Beaumonster documents Dayton’s winding two-lane blacktop as a singer, songwriter, studio musician, and solo artist, all in an East Texas drawl that is both confident and charmingly cocky. To paraphrase the title of one of his signature songs, ‘Jesse is a badass.’”—Joseph Hudak, Senior Editor at Rolling Stone