Unearthed: A Lost Actress, a Forbidden Book, and a Search for Life in the Shadow of the Holocaust (Hardcover) 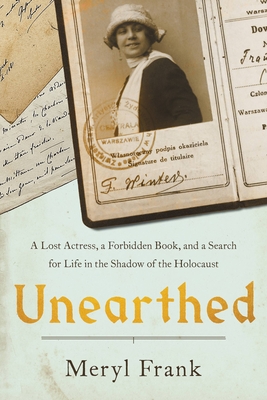 Unearthed: A Lost Actress, a Forbidden Book, and a Search for Life in the Shadow of the Holocaust (Hardcover)


Not Yet Published—Pre-Order Now
A thrilling mystery woven into a beautifully-constructed family memoir: Meryl Frank journeys to seek the truth about a beloved and revolutionary cousin, a celebrated actress in Vilna before WWII, and to answer the question of how the next generation should honor the memory of the Holocaust

As child, Meryl Frank was the chosen inheritor of family remembrance. Her aunt Mollie, a formidable and cultured woman, insisted that Meryl never forget who they were, where they came from, and the hate that nearly destroyed them. Over long afternoons, Mollie told her about the shtetl, the theater, and, above all else, Meryl’s cousin, the radiant Franya Winter. Franya was the leading light of Vilna’s Yiddish theater, a remarkable and precocious woman, a star at the center of a Jewish artistic Mecca who cast off the restrictions of her Hasidic family and community to play roles as prostitutes and bell hops and lovers and nuns. Yet there was one thing her aunt Mollie would never tell Meryl: how Franya died. Before Mollie passed away, she gave Meryl a Yiddish book contained the terrible answer, but forbade her to read. And for years, Meryl obeyed.

Unearthed is the story of Meryl’s search for Franya, a mystery woven into a family memoir, a timely history of hatred and resistance. Through archives across four continents, by way of chance encounters and miraculous discoveries, and eventually, guided by the shocking truth recorded in the pages of the forbidden book, Meryl conjures the rogue spirit of her cousin, her beauty and her tragedy. Her search reveals a lost world destroyed by hatred, illuminating the cultural haven of Vilna and its resistance during World War II. And as she seeks to find her lost family legacy, Meryl looks for answers to the questions that have defined her life: What is our duty to the past? How do we honor such memories while keeping them from consuming us? And most important of all, what do we teach our children about tragedy?

Meryl Frank is president of Makeda Global Network, an international consulting firm that works with thousands of women worldwide, and a member of the US Holocaust Memorial Council. Over a long and varied career, she has been an activist, a mayor, an ambassador, and champion of women’s leadership and political participation around the world. She has worked across multiple continents offering leadership and media training, advice on good governance and policy-making, and media and film programs to lift up refugees torn from their homeland. In the United States, she has developed policy and advocated for paid parental leave, HIV/AIDS awareness and the Equal Rights Amendment, raised money for presidential candidates and many other office-seekers.  Frank came to wide public prominence in 2000 when she led a grassroots campaign against the deeply entrenched political machine in her hometown of Highland Park, New Jersey, and won election as mayor, a position she held for the next ten years. In 2009, President Obama appointed her United States Representative and, subsequently, Ambassador to the United Nations Commission on the Status of Women. In 2012, the Jerusalem Post selected her as one of the fifty most influential Jews in the world.

Frank has served on the boards of the American Jewish Congress Jewish Women International, Sisterhood of Salaam Shalom and Warmheart Worldwide. She has also served in leadership roles with the Democratic National Committee’s National Women’s Leadership Forum, the National Finance Committee, and the National Jewish Leadership Council. She is a former Executive Director of FilmAid International, a nonprofit organization which uses film and media to empower and educate refugee populations. She lives in Highland Park, New Jersey.