Into Every Generation a Slayer Is Born: How Buffy Staked Our Hearts (Hardcover) 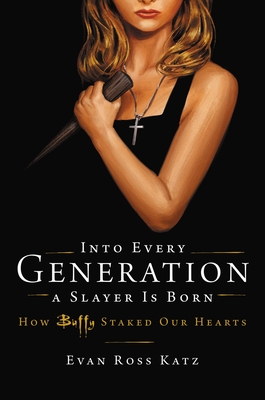 Into Every Generation a Slayer Is Born: How Buffy Staked Our Hearts (Hardcover)

Explore the history and cultural impact of a groundbreaking television show adored by old and new fans alike: Buffy the Vampire Slayer.

Over the course of its seven-year run, Buffy the Vampire Slayer cultivated a loyal fandom and featured a strong, complex female lead, at a time when such a character was a rarity. Evan Ross Katz explores the show’s cultural relevance through a book that is part oral history, part celebration, and part memoir of a personal fandom that has universal resonance still, decades later.

Katz—with the help of the show’s cast, creators, and crew—reveals that although Buffy contributed to important conversations about gender, sexuality, and feminism, it was not free of internal strife, controversy, and shortcomings. Men—both on screen and off—would taint the show’s reputation as a feminist masterpiece, and changing networks, amongst other factors, would drastically alter the show’s tone.

Into Every Generation a Slayer Is Born engages with the very notion of fandom, and the ways a show like Buffy can influence not only how we see the world but how we exist within it.

Evan Ross Katz is a writer, podcast host, and high-pitched loudmouth whose work has appeared in the pages of GQ, Harper’s Bazaar, Interview Magazine, Rolling Stone, Oprah Magazine, Teen Vogue, Town & Country and more. He is a fashion columnist at Paper Magazine, a contributor at The Cut, and host of the podcasts Shut Up Evan and Drop Your Buffs. He is best known as the world’s preeminent Sarah Michelle Gellar historian and a “die-hard Buffy aficionado,” according to Vogue, and for being blocked on Twitter by Kim Cattrall in 2017 (she has since unblocked). He was selected as one of Fast Company’s Most Creative People in Business 2021.

One of Bustle's Best Books of March 2022

"Evan has produced the definitive feast for Buffy Buffs!"—Andy Cohen

"Evan Ross Katz has jumped into the world of Buffy in a way no one ever has before. I’m in awe of the way Evan loves Buffy, cares about Buffy, and writes about Buffy. Each chapter reignited my love for the show in a new kind of way. This book is a deep dive and a love letter and a brilliant reminder that a good piece of art can live on far past a series finale.” —Kiernan Shipka

“This incisive deep dive into Buffy the Vampire Slayer delves into the stories behind the groundbreaking television show. Evan Ross Katz, through an impressive array of interviews with the show’s cast, creators, crew, and notable self-proclaimed stans—Stacey Abrams is the first fan we hear from—explores the cultural impact of this beloved show without skirting away from its shortcomings. Katz lovingly and shrewdly unpacks the very meaning of fandom, Buffy’s long-lasting influence on its fans, pop culture, and academia. It is a perfect read for anyone interested in pop culture, and of course lovers of the ever-iconic Slayer.”—Oprah Daily

"As someone who didn't watch Buffy until meeting Evan, his fandom, understanding, and total embrace of the nuance and complexities of the show ravages this book, and turns a chambré viewer into a fangirl. His writing is fresh, and so are his perspectives—through reading, you contemplate the series through his eyes and discover new vantage points through anecdotes from those orbiting the Buffy universe. Not only is the show iconic, so is this author."—Christopher John Rogers

“Katz approaches the show’s cultural relevance and universal appeal with love and criticism, delivering an oral history that any staple of pop culture would be thankful to have…. [W]ell-researched…. Truly, no stone feels unturned.”—Paper Mag

“The first reported Buffy the Vampire Slayer book is a loving critique of a complicated show. Evan Ross Katz excavates Buffy's legacy—including the Joss Whedon allegations—through new interviews with the cast, crew, and fans like Stacey Abrams…. The show had hardly any characters of color, and fewer still that were fleshed out or appeared in more than a handful of episodes. Ross Katz’s book offers as much of a corrective as is possible all these years later, featuring interviews with Black supporting actors and guest stars like Bianca Lawson, who played the slayer Kendra in three episodes of the show….Into Every Generation doesn’t answer the question of whether it’s possible to separate the art from the artist, but it does love—and lovingly critique—the art without letting the artist off the hook.”—Jezebel

“In Evan Ross Katz’s Into Every Generation a Slayer Is Born, the show’s influence and legacy gets the in-depth exploration it so richly deserves."—Bustle

“Into Every Generation is a loving, comprehensive telling of the arc of the series, and well as a study into its glories and failures."—AV Club

“[A] tantalizing and thoroughly engaging tome….Though much has been written about the seminal show, fans who are wrestling with the fallout of Whedon's behavior will find new information here, along with a celebration of many significant ways Buffy the Vampire Slayer shaped the culture and provides solace and inspiration to many of its fans. A loving look at an influential show….[fans] will adore this accessible and juicy read.”—Booklist (starred)

“[An] entertaining debut… Katz movingly reflects [on] the show…. Still, he doesn’t shy away from problematic issues… sharply critiquing its lack of racial diversity as well as abuse allegations about its writer….Mixing keen cultural analysis, wit, and an obsessive’s zeal, this will have fans riveted.”—Publishers Weekly

“[Into Every Generation a Slayer Is Born] is entertaining, impassioned and carries Katz’s acute critical eye.”—CoolHunting.com

“A must-read for any Buffy fanatic."—TooFab

“We can’t emphasize enough how you need to get your hands on a copy….Dozens of heartwarming, heartbreaking & enlightening personal perspectives on their experiences during the shows' runs and the impact it continues to have on them today.”—BleedingCool.com

"Organized at first around the chronological progression from mediocre action flick to a season-by-season breakdown, the book is interspersed with asides and witticisms that entertain as well as bridge themes and interweave facts. The later section, about controversies and legacies, is approached with skill and empathy. Katz’s writing captures his own voice so well that his audiobook narration is pitch-perfect."
—Library Journal (audiobook review)