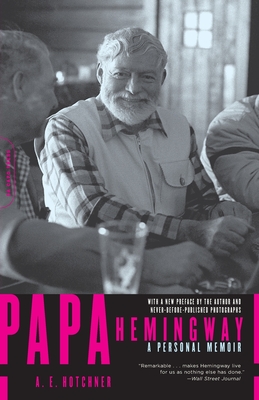 By A. E. Hotchner


Not On Our Shelves—Ships in 1-5 Days
Between 1948 and 1961, Earnest Hemingway and A. E. Hotchner traveled together from New York to Paris to Spain, fished the waters off Cuba, hunted in Idaho, and ran with the bulls in Pamplona. And everywhere they talked. For 14 years, Hotchner and Hemingway shared a conversation. Hemingway reminisced about his childhood, recalled the Paris literary scene in the twenties, remembered his early years as a writer, and recounted the real events that lay behind his fiction. And Hotchner took it all down. His notes on the many occasions he spent with his friend Papa -- in Venice and Rome, in Key West, on the Riviera, in Ketchum, Idaho, where Hemingway died by his own hand in 1961 - provide the material for this utterly truthful, profoundly compassionate bestselling memoir of the Nobel and Pulitzer Prize-winning author. What emerges is an extraordinary portrait of a great writer who had, and determined, the time of his life.
A.E. Hotchner is a dramatist, novelist, screenwriter, and biographer. He is Paul Newman's partner in Newman's Own. He divides his time between Westport, Connecticut, and Manhattan.