Reclaiming Patriotism in an Age of Extremes (Paperback) 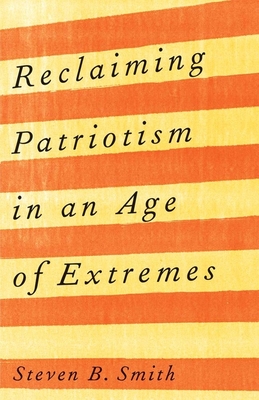 Reclaiming Patriotism in an Age of Extremes (Paperback)

By Steven B. Smith


On Our Shelves Now at:
A rediscovery of patriotism as a virtue in line with the core values of democracy in an extremist age

“Like you perhaps, I still regard myself as an extremely patriotic person. Which is why I so admired [this book]. . . . It explained my emotion to me, as it might yours to you." —David Brooks, New York Times

“Smith superbly illuminates the distinctiveness of the American idea of patriotism and reminds us of how important patriotism is, and how essential to making America better.”—Leslie Lenkowsky, Wall Street Journal

The concept of patriotism has fallen on hard times. What was once a value that united Americans has become so politicized by both the left and the right that it threatens to rip apart the social fabric. On the right, patriotism has become synonymous with nationalism and an “us versus them” worldview, while on the left it is seen as an impediment to acknowledging important ethnic, religious, or racial identities and a threat to cosmopolitan globalism.

Steven B. Smith reclaims patriotism from these extremist positions and advocates for a patriotism that is broad enough to balance loyalty to country with other loyalties. Describing how it is a matter of both the head and the heart, Smith shows how patriotism can bring the country together around the highest ideals of equality and is a central and ennobling disposition that democratic societies cannot afford to do without.
Steven B. Smith is the Alfred Cowles Professor of Political Science and professor of philosophy at Yale University. He is the author of numerous books, most recently Modernity and Its Discontents.
“Smith superbly illuminates the distinctiveness of the American idea of patriotism and reminds us of how important patriotism is, and how essential to making America better.”—Leslie Lenkowsky, Wall Street Journal

“Like you perhaps, I still regard myself as an extremely patriotic person. Which is why I so admired . . . Reclaiming Patriotism in an Age of Extremes. It explained my emotion to me, as it might yours to you.”—David Brooks, New York Times

“Smith has drawn intelligent distinctions. . . . [His] book will help prevent patriotism from fading to something only dimly remembered.” —George Will, Washington Post

“In a cultural moment marked by divisions surrounding issues of race, class, sexuality, gender identity, religion, economic disparities, and a host of other challenges, Smith’s book is deeply necessary. . . . A needed light while we walk together on a dark path.”—John D. Wilsey, Christianity Today

“A penetrating examination of the meaning of patriotism. . . . A well-argued call for civic renewal.”—Kirkus Reviews

“It could not be a more timely or necessary work.”—Gabriel Schoenfeld, American Purpose

“It’s a brave man who takes on the vital and necessary task of defining and defending patriotism from the left. Professor Steven Smith rises to the challenge, making a nuanced but forceful case in concise and compelling prose.”—Anne-Marie Slaughter, author of Chessboard and the Web: Strategies of Connection in a Networked World

“Steven B. Smith brings a wonderful blend of learning and lucidity to the most important question of the day: What does it mean to be American? At a time when Trumpian conservatives have revived the ethno-nationalism that runs like a dark stain throughout our history, and when many progressives regard the nation’s founding principles as little more than hypocrisies, Smith’s appeal to a patriotism of liberalism is as refreshing as it is vital.”—Robert Kagan, author of The Jungle Grows Back: America and Our Imperiled World

“In contrast to those who see only a choice between xenophobic nationalism or radical anti-Americanism, Steven B. Smith shows how American patriotism can be a partnership in pursuit of a more perfect union. A valuable book that blends cosmopolitan learning with a deep understanding of what is best in America.”—Rogers Smith, author of That Is Not Who We Are! Populism and Peoplehood

“Steven Smith decouples patriotism from nationalism and reclaims a viable conception of patriotism from its critics on the left and right. Reclaiming Patriotism in an Age of Extremes is a clearly written, historically informed, and utterly necessary book for our troubled times.”—William A. Galston, Brookings Institution