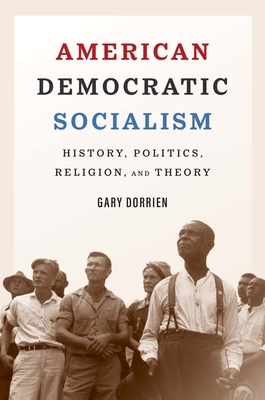 
On Our Shelves Now at:
A sweeping, ambitious history of American democratic socialism from one of the world’s leading intellectual historians and social ethicists

“The movement whose tangled history Gary Dorrien tells in American Democratic Socialism has deep roots in the very ‘American’ values it is accused of undermining. . . . The version of the socialist left that emerges is one that deserves more attention.”—Hari Kunzru, New York Review of Books

Democratic socialism is ascending in the United States as a consequence of a widespread recognition that global capitalism works only for a minority and is harming the planet’s ecology. This history of American democratic socialism from its beginning to the present day interprets the efforts of American socialists to address and transform multiple intersecting sites of injustice and harm. Comprehensive, deeply researched, and highly original, this book offers a luminous synthesis of secular and religious socialisms, detailing both their intellectual and their organizational histories.
Gary Dorrien is the Reinhold Niebuhr Professor of Social Ethics at Union Theological Seminary and professor of religion at Columbia University. His previous books with Yale University Press include The New Abolition, Breaking White Supremacy, and Social Democracy in the Making.
“The movement whose tangled history Gary Dorrien tells in American Democratic Socialism has deep roots in the very ‘American’ values it is accused of undermining. . . . The version of the socialist left that emerges is one that deserves more attention.”—Hari Kunzru, New York Review of Books

“Gary Dorrien is the greatest theological ethicist of the twenty-first century, our most compelling political theologian, and one of the most gifted historians of ideas in the world. His American Democratic Socialism is a work of astonishing erudition. Best of all, Dorrien is not only a searing chronicler of prophetic thought, but also a bold Christian participant in the historic quest for social justice.”—Michael Eric Dyson, author of Entertaining Race: Performing Blackness in America

“Dorrien’s book is a tour de force. With eloquence and rigor, it reveals the strong history of democratic socialism in the U.S. It imagines an economic democracy that weds ecological survival with economic, racial, and gender justice. That is a matter of life and death.”—Cynthia Moe-Lobeda, author of Resisting Structural Evil: Love as Ecological-Economic Vocation

“The book highlights Dorrien’s striking thinking as a strategist in the fight for socialism as well as a superb historian who brings the role of religion into the center of the story.”—Richard Healey, senior advisor, Grassroots Policy Project

“American Democratic Socialism is a brilliant and timely book. Dorrien offers a big, ambitious, synthetic political and intellectual history of the whole American democratic socialist tradition, giving particular attention to religious socialists, the centrality of race in American politics, and the intellectual contributions of women.”—Geoffrey Kurtz, author of Jean Jaurès: The Inner Life of Social Democracy

“This is the history of American religious socialism we need as we debate and organize for greater equity in the political economy. Dorrien brilliantly excavates the unique intersectional contexts of the U.S., helping us understand how we got to this political moment and where we might go next.”—Melissa Snarr, Vanderbilt Divinity School