Providence and the Invention of American History (Hardcover) 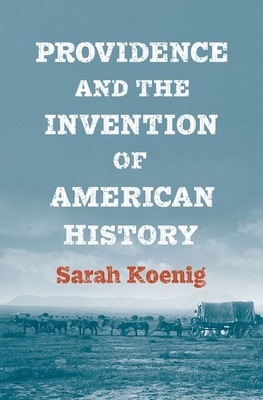 Providence and the Invention of American History (Hardcover)

In 1847, Protestant missionary Marcus Whitman was killed after a disastrous eleven-year effort to evangelize the indigenous peoples of the Pacific Northwest. By 1897, Whitman was a national hero, celebrated in textbooks, monuments, and historical scholarship as the “Savior of Oregon.” But his fame was based on a tall tale—one that was about to be exposed.

Sarah Koenig traces the rise and fall of Protestant missionary Marcus Whitman’s legend, revealing two patterns in the development of American history. On the one hand is providential history, marked by the conviction that God is an active agent in human history and that historical work can reveal patterns of divine will. On the other hand is objective history, which arose from the efforts of Catholics and other racial and religious outsiders to resist providentialists’ pejorative descriptions of non‑Protestants and nonwhites. Koenig examines how these competing visions continue to shape understandings of the American past and the nature of historical truth.
Sarah Koenig is assistant professor of history at Ramapo College. She earned her joint Ph.D. in History and Religious Studies from Yale University.
“A compelling story that opens an exciting conversation in the field of American history about the religious assumptions that animated the field’s founding, and endure in its core assumptions.”—Sonia Hazard, Florida State University

“An original piece of intellectual history, which locates the Whitman legend within broader historiographical concerns.”—Brandi Denison, University of North Florida

"In this extraordinarily inventive book, Sarah Koenig demonstrates beautifully how the shifting tectonics of contested interpretations, both providential and secular, continue to inform our understanding of the past."—Randall Balmer, Dartmouth College

"In this finely crafted analysis of the legend that missionary Marcus Whitman Saved Oregon, Sarah Koenig brilliantly illuminates a crucial transition from providential to scientific history and its meanings today."—Jeffrey Ostler, author of Surviving Genocide

"This book explains how a missionary myth became the testing ground for historical thinking. Beautifully written and bravely conceived, Koenig authors a landmark achievement in the study of American history."—Kathryn Lofton, author of Consuming Religion