Thomas Jefferson: A Biography of Spirit and Flesh (Hardcover) 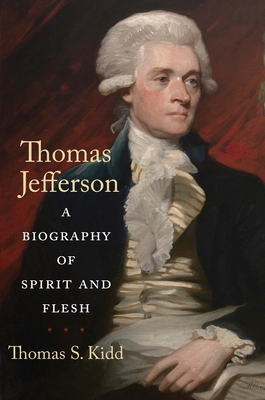 Thomas Jefferson: A Biography of Spirit and Flesh (Hardcover)


On Our Shelves Now at:
A revelatory new biography of Thomas Jefferson, focusing on his ethical and spiritual life

“Kidd’s biography may well be the best treatment of Jefferson’s religious and moral life available, and certainly it is among the few to take those two subjects seriously while carefully avoiding hagiography or anachronism. It deserves a wide readership.”—Miles Smith, National Review

“Set aside everything you think you know about Thomas Jefferson and religion, and read this book. This is the definitive account. It is well written, well researched, judicious, and entirely convincing.”—Timothy Larsen, Wheaton College

Thomas Jefferson was arguably the most brilliant and inspiring political writer in American history. But the ethical realities of his personal life and political career did not live up to his soaring rhetoric. Indeed, three tensions defined Jefferson’s moral life: democracy versus slavery, republican virtue versus dissolute consumption, and veneration for Jesus versus skepticism about Christianity.

In this book Thomas S. Kidd tells the story of Jefferson’s ethical life through the lens of these tensions, including an unapologetic focus on the issue where Jefferson’s idealistic philosophy and lived reality clashed most obviously: his sexual relationship with his enslaved woman Sally Hemings. In doing so, he offers a unique perspective on one of American history’s most studied figures.
Thomas S. Kidd is distinguished professor of history at Baylor University. His books include Benjamin Franklin: The Religious Life of a Founding Father and Who Is an Evangelical? The History of a Movement in Crisis. He lives in Woodway, Texas.
“What we need is a balanced reassessment of Jefferson’s thought and attitudes on God and religion. Thomas S. Kidd, a professor of history at Baylor, gives us that in his crisply written life Thomas Jefferson: A Biography of Spirit and Flesh.”—Barton Swaim, Wall Street Journal

“[An] excellent, timeless biography. . . . Balanced and judicious.”—Collin Garbarino, World, Book of the Year for 2022

“Set aside everything you think you know about Thomas Jefferson and religion, and read this book. Thomas Jefferson: A Biography of Spirit and Flesh is the definitive account. It is well written, well researched, judicious, and entirely convincing.”—Timothy Larsen, Wheaton College

“At long last, we have a biography of Thomas Jefferson that treats the enigmatic founder as more than just a living symposium of ideas or as a living museum of hypocrisies. In this long-awaited book, Thomas Kidd, one of the world’s most respected historians, portrays for us a compellingly complicated human being—who through both genius and will, and despite grave flaws, gave us a country we could not recognize apart from him. For people all across the ideological spectrum, this biography will be the starting point for countless new arguments and ideas.”—Russell Moore, chair of theology, Christianity Today

“I don’t know a scholar more able than Thomas Kidd to bring breadth, depth, and moral clarity to a treatment of a figure as significant and complicated as Thomas Jefferson—and to do so with vivid, compelling prose that will engage a broad audience of readers.”—Karen Swallow Prior, Southeastern Baptist Theological Seminary

“In ‘trying to untangle the thicket of Jefferson’s moral, philosophical, and theological commitments, in the context of his time, not ours, while avoiding both ‘patriotic apologetics’ and ‘iconoclastic destruction,’ Thomas Kidd gives us the Thomas Jefferson we need right now.”—Kevin R. C. Gutzman, author of Thomas Jefferson—Revolutionary: A Radical’s Struggle to Remake America