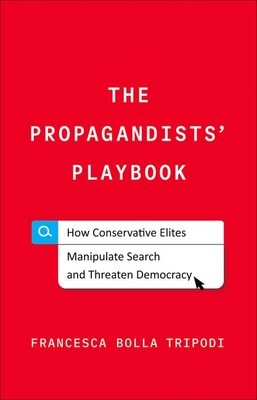 
On Our Shelves Now at:
An examination of what algorithmic polarization means for society and how conservative elites use media literacy tactics to spread propaganda

The Propagandists’ Playbook peels back the layers of the right-wing media manipulation machine to reveal why its strategies are so effective and pervasive, while also humanizing the people whose worldviews and media practices conservatism embodies. Based on interviews and ethnographic observations of two Republican groups over the course of the 2017 Virginia gubernatorial race—including the author’s firsthand experience of the 2017 Unite the Right rally—the book considers how Google algorithms, YouTube playlists, pundits, and politicians can manipulate audiences, reaffirm beliefs, and expose audiences to more extremist ideas, blurring the lines between reality and fiction. Francesca Tripodi argues that conservatives who embody the Christian worldview give authoritative weight to original texts and interrogate the media using the same tools taught to them in Bible study—for example, using Google to “fact check” the news. The result of this practice, tied to conservative marketing tactics, is more than a reaffirmation of existing beliefs: it is a radicalization of content and a changing of narratives adopted by the media. Tripodi also demonstrates the pervasiveness of white supremacy in the conservative media ecosystem, as well as its mainstream appeal, scope, and spread.
Francesca Bolla Tripodi is an assistant professor at the School of Information and Library Science at University of North Carolina, Chapel Hill, and a a research affiliate at the Data & Society Research Institute.
“The Propagandists’ Playbook offers a frightening description of how some very bad actors radicalize people of good will into beliefs that are contrary to their own interests and that harm America and democracy. U​nderstanding such methods is key to protecting the country and to offering hope to those who might be de-radicalized.”—Craig Newmark, Founder of Craigslist

“The Propagandists’ Playbook brilliantly and empathetically illuminates the interplay between religious communities, political conservatism, hate groups, and technology to explain our contemporary struggle with disinformation and polarization. Informative and grounding, Tripodi’s book provides a framework for going beyond quick-fix thinking. This is essential reading for anyone anxious about partisan politics, social media, or information disorder.”—danah boyd, author of It’s Complicated: The Social Lives of Networked Teens

“The Propagandists’ Playbook takes readers down the rabbit hole of the conservative media disinformation complex, showing lies are a path to power. This is a vital, meticulously researched warning on the threat posed by conservative media manipulation.”—Victor Ray, The University of Iowa

"Tripodi provides a Rosetta stone for understanding how conservative voters interpret news, legislation and politicians' pronouncements. Through her guidance, much of what’s so baffling about contemporary US political discourse becomes disturbingly clear."—Ethan Zuckerman, author of Mistrust: Why Losing Faith in Institutions Provides the Tools to Transform Them