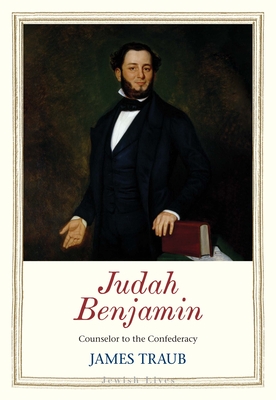 
In Stock—Click for Locations
A moral examination of Judah Benjamin—one of the first Jewish senators, confidante to Jefferson Davis, and champion of the cause of slavery

“This new biography complicates the legacy of Benjamin . . . who used his nimble legal mind to defend slavery and the Confederacy.”—New York Times Book Review

“A cogent argument for acknowledging, rather than ignoring, Benjamin’s role in both Jewish and American history.”—Diane Cole, Wall Street Journal

Judah P. Benjamin (1811–1884) was a brilliant and successful lawyer in New Orleans, and one of the first Jewish members of the U.S. Senate. He then served in the Confederacy as secretary of war and secretary of state, becoming the confidant and alter ego of Jefferson Davis. In this new biography, author James Traub grapples with the difficult truth that Benjamin, who was considered one of the greatest legal minds in the United States, was a slave owner who deployed his oratorical skills in defense of slavery.

How could a man as gifted as Benjamin, knowing that virtually all serious thinkers outside the American South regarded slavery as the most abhorrent of practices, not see that he was complicit with evil? This biography makes a serious moral argument both about Jews who assimilated to Southern society by embracing slave culture and about Benjamin himself, a man of great resourcefulness and resilience who would not, or could not, question the practice on which his own success, and that of the South, was founded.
James Traub teaches foreign policy and intellectual history at New York University, where he is a Fellow at the Center on International Cooperation. He has written numerous books, and is a columnist and contributor at Foreign Policy.
“A cogent argument for acknowledging, rather than ignoring, Benjamin’s role in both Jewish and American history.”—Diane Cole, Wall Street Journal

“This new biography complicates the legacy of Benjamin, a 19th-century New Orleans lawyer and one of the first Jewish senators in America, who used his nimble legal mind to defend slavery and the Confederacy.”—New York Times Book Review

"James Traub elaborates the unexpected life of Judah Benjamin, who advanced the slaveholder’s cause from beginning to end, as both understandable and purposefully obscured. Absolutely fascinating!"—Nell Irvin Painter, author of The History of White People

“This is, by far, the best and most readable, short biography of Benjamin that exists.”—Jonathan Sarna, author of American Judaism: A History