Dress in the Age of Jane Austen: Regency Fashion (Hardcover) 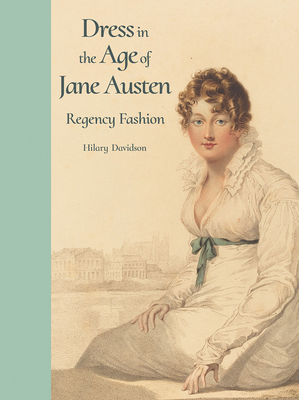 Dress in the Age of Jane Austen: Regency Fashion (Hardcover)


Not On Our Shelves—Ships in 1-5 Days
A comprehensive and beautifully illustrated examination of dress, clothing, fashion, and sewing in the Regency seen through the lens of Jane Austen’s life and writings

This lively book reveals the clothing and fashion of the world depicted in Jane Austen’s beloved books, focusing on the long Regency between the years 1795 and 1825. During this period, accelerated change saw Britain’s turbulent entry into the modern age, and clothing reflected these transformations. Starting with the intimate perspective of clothing the self, Dress in the Age of Jane Austen moves outward through the social and cultural spheres of home, village, countryside, and cities, and into the wider national and global realms, exploring the varied ways people dressed to inhabit these environments. Jane Austen’s famously observant fictional writings, as well as her letters, provide the entry point for examining the Regency age’s rich complexity of fashion, dress, and textiles for men and women in their contemporary contexts.

Lavishly illustrated with paintings, drawings, historic garments, and fashion plates—including many previously unpublished images—this authoritative yet accessible book will help readers visualize the external selves of Austen’s immortal characters as clearly as she wrote of their internal ones. The result is an enhanced understanding of Austen’s work and time, and also of the history of one of Britain’s most distinctive fashion eras.
Hilary Davidson is a dress and textile historian based between Britain and Australia, and an Honorary Associate at the University of Sydney. She has curated, lectured, broadcast and published extensively in her field.
“Combining meticulous scholarship and intellectual heft with an engaging, approachable style is one of the most difficult writing tasks there is, but Davidson makes it seem effortless, using the life, the letters and the novels of Austen as an entry point into her exploration of clothing, its modes of production, its aesthetics, and its social meaning.”—Kerryn Goldsworthy, Sydney Morning Herald

“With this debut, Davidson . . . has done a superb job of placing clothing in Jane Austen’s fiction and in her journals and letters within the larger context of Regency fashion and its reflection of a rapidly changing, and globalizing, society. . . . This extensively researched and beautifully illustrated book is fascinating to read, fills a gap in Austen scholarship, and makes an impressive contribution to Austen studies"—Publishers Weekly, starred review