Cornwallis: Soldier and Statesman in a Revolutionary World (Hardcover) 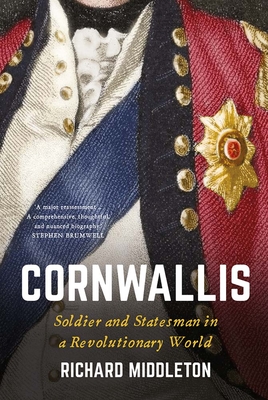 Cornwallis: Soldier and Statesman in a Revolutionary World (Hardcover)


Not On Our Shelves—Ships in 1-5 Days
The first biography of Charles Cornwallis in forty years—the soldier, governor, and statesman whose career covered America, India, Britain, and Ireland

Charles, First Marquis of Cornwallis  (1738–1805), was a leading figure in late eighteenth-century Britain. His career spanned the American War of Independence, Irish Union, the French Revolutionary Wars, and the building of the Second British Empire in India—and he has long been associated with the unacceptable face of Britain’s colonial past.

In this vivid new biography, Richard Middleton shows that this portrait is far from accurate. Cornwallis emerges as a reformer who had deep empathy for those under his authority, and was clear about his obligation to govern justly. He sought to protect the population of Bengal with a constitution of written laws, insisted on Catholic emancipation in Ireland, and recognized the limitations of British power after the American war. Middleton reveals how Cornwallis’ rewarding of merit, search for economy, and elimination of corruption helped improve the machinery of British government into the nineteenth century.
Richard Middleton is an independent scholar and was formerly associate professor of American history at Queen’s University Belfast. He is the author of The Bells of Victory, Colonial America, Pontiac’s War, and The War of American Independence.
“[A] well researched [biography]”—Gerard DeGroot, The Times

“Richard Middleton, in this defensive biography of Cornwallis, the first for almost half a century, proves himself an able historian who has mastered the relevant sources… [Cornwallis’s] efforts are recorded diligently by Middleton.”—Paul Lay, The Sunday Telegraph

“Richard Middleton vividly narrates the surprising and revealing life of Britain's leading general during the Age of Revolutions.  In lucid prose and telling detail, Cornwallis reappears as a sensible, progressive, and effective leader in crises that both shook and rebuilt the British Empire.”—Alan Taylor, author of American Revolutions: A Continental History, 1750-1804

“An impressive biography of a key figure in the development of the British Empire.”—Jeremy Black, author of War for Empire

“A comprehensive, thoughtful, and nuanced biography of a leading British soldier and administrator whose career spanned three continents during a tumultuous half century of war and revolution. In this major reassessment, the general best known for sustaining a defeat that guaranteed American independence emerges as an unusually capable, humane, and – by the standards of his own age – enlightened servant of empire.”—Stephen Brumwell, author of George Washington: Gentleman Warrior

“Scholarly yet accessible to general readers, Richard Middleton’s new biography of Cornwallis captures his pivotal role in events in America, India and Ireland.  Based on a heroic trawl through a great mass of primary sources, notably Cornwallis voluminous papers, this book will surely endure as the standard life of this eighteenth-century imperial soldier.”—Stephen Conway, author of History of the British Army, 1714-1783