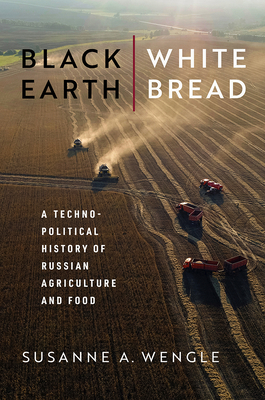 
Not On Our Shelves—Ships in 1-5 Days
Like all facets of daily life, the food that Russian farms produced and citizens ate—or, in some years, didn’t eat—underwent radical shifts in the century between the Bolshevik Revolution and Vladimir Putin’s presidency. The modernization of agriculture during this time is usually understood in terms of advances in farming methods. Susanne A. Wengle’s important interdisciplinary history of Russia’s agriculture and food systems, however, documents a far more complex story of the interactions between political policies, daily cultural practices, and technological improvements.

Examining governance, production, consumption, nature, and the ensuing vulnerabilities of the agrifood system, Wengle reveals the intended and unintended consequences of Russian agricultural policies since 1917. Ultimately, Black Earth, White Bread calls attention to Russian technopolitics and how macro systems of government impact life on a daily, quotidian level.
Susanne A. Wengle is the Nancy R. Dreux associate professor of political science at the University of Notre Dame and the author of Post-Soviet Power: State-Led Development and Russia's Marketization.
“Who eats what? Susanne A. Wengle’s important and gripping book recasts a century of Russian history as a series of revolutionary transformations of the country’s food system. Answers to problems of food production and consumption are central pillars of political power and legitimacy for communist and post-communist regimes alike.”—Henry Thomson, Arizona State University

“This eminently readable book, based on fascinating research, serves as an urgent reminder that techno-scientific projects in agriculture have deep histories and variegated geographies, and thus are hardly an invention of Silicon Valley start-up culture.”—Julie Guthman, University of California, Santa Cruz

“Challenges you to think beyond the confines of your respective specialty and consider big themes in agricultural history and policy. . . . Wengle should be commended for her lucid prose and sharp analysis, as well as the inclusion of several maps created by the author herself.”—H-Net Reviews