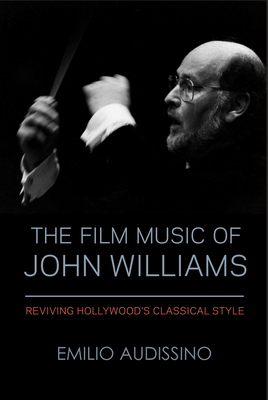 
In Stock—Click for Locations
From the triumphant “Main Title” in Star Wars to the ominous bass line of Jaws, John Williams has penned some of the most unforgettable film scores—while netting more than fifty Academy Award nominations. This updated and revised edition of Emilio Audissino’s groundbreaking volume takes stock of Williams’s creative process and achievements in music composition, including the most recent sequels in the film franchises that made him famous. Audissino discusses Williams’s unique approach to writing by examining his neoclassical style in context, demonstrating how he revived and revised classical Hollywood music. This volume details Williams’s lasting impact on the industry and cements his legacy as one of the most important composers in movie history. A must for fans and film-music lovers alike.
Emilio Audissino is a senior lecturer in audiovisual production at Linnaeus University. He is the author of Film/Music Analysis: A Film Studies Approach.
“A compelling, well-researched investigation of John Williams’s role in the Hollywood film music industry.”—Notes: Quarterly Journal of the Music Library Association

“Whether you’re at all interested in film scores—their history, their changing styles, their reception over the years—or in the music of John Williams in particular, you will find much to enjoy in this new book.”—Film Music Notes

“An in-depth examination of how the legendary film composer restored the classical Hollywood music style and became a pivotal figure [in] the history of film music.”—Publishers Weekly

“Audissino should be commended for his passion and research of such a stellar composer as John Williams.”—Larry Timm, author of The Soul of Cinema: An Appreciation of Film Music