The Big Bang Symphony: A Novel of Antarctica (Hardcover) 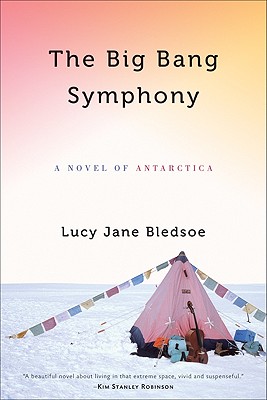 The Big Bang Symphony: A Novel of Antarctica (Hardcover)


Not On Our Shelves—Ships in 1-5 Days
Antarctica is a vortex that draws you back, season after season. The place is so raw and pure, all seal hide and crystalline iceberg. The fishbowl communities at McMurdo Station, South Pole Station, and in the remote field camps intensify relationships, jack all emotion up to a 10. The trick is to get what you need and then get out fast.
At least that’s how thirty-year-old Rosie Moore views it as she flies in for her third season on the Ice. She plans to avoid all entanglements, romantic and otherwise, and do her work as a galley cook. But when her flight crash-lands, so do all her plans.
Mikala Wilbo, a brilliant young composer whose heart—and music—have been frozen since the death of her partner, is also on that flight. She has come to the Ice as an artist-in-residence, to write music, but also to secretly check out the astrophysicist father she has never met.
Arriving a few weeks later, Alice Neilson, a graduate student in geology who thinks in charts and equations, is thrilled to leave her dependent mother and begin her career at last. But from the start she is aware that her post-doc advisor, with whom she will work in Antarctica, expects much more from their relationship.
As the three women become increasingly involved in each other’s lives, they find themselves deeply transformed by their time on the Ice. Each falls in love. Each faces challenges she never thought she would meet. And ultimately, each finds redemption in a depth and quality of friendship that only the harsh beauty of Antarctica can engender.  Finalist, Lambda Literary Awards Finalist, Ferro-Grumley Award for LGBT Fiction, awarded by the Publishing Triangle Finalist, Northern California Independent Booksellers Association Honorable Mention, Foreword Magazine’s Gay/Lesbian Fiction Book of the Year Best Books for General Audiences, selected by the Public Library Association
Lucy Jane Bledsoe has traveled to Antarctica three times and has stayed at all three American stations, as well as in field camps where scientists are studying penguins, climate change, and the Big Bang. She is the recipient of the 2009 Sherwood Anderson Prize for Fiction, the 2009 Arts & Letters Fiction Prize, a California Arts Council Fellowship, an American Library Association Stonewall Award, and two National Science Foundation Artists & Writers in Antarctica Fellowships. Her Antartic books include The Ice Cave: A Woman's Adventures from the Mojave to the Antartic, also published by the University of Wisconsin Press.
“Lucy Jane Bledsoe knows that the people who go to Antarctica move to a heightened existence, as if to the roof of the universe, where they are stripped to their essences under a surreal sun. A beautiful novel about living in that extreme space, vivid and suspenseful.”—Kim Stanley Robinson, award-winning author of Antarctica and the Science in the Capital trilogy

“Against the frozen blues and grays of McMurdo Station, three women trick themselves into thinking they can ‘get what they need and then get out fast.’ But ice holds onto things. Cold makes the wrong kind of warm all too easy. When three independent women come to ‘the cold white polar beauty’ with cautious longing, what they find isn’t what they’d hoped for. Lucy Jane Bledsoe depicts place as a character in this charming, tightly orchestrated novel, filled with striking description and suspenseful plot twists.”
—Carol Guess, author of Tinderbox Lawn