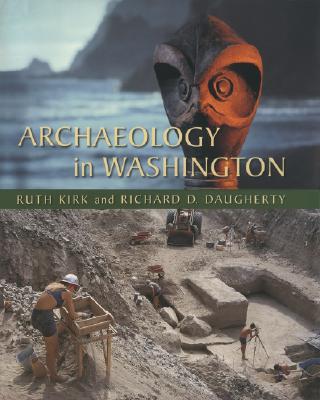 Archaeology--along with Native American traditions and memories--holds a key to understanding early chapters of the human story in Washington. This all-new book draws together and brings up to date much of what has been learned about the state's prehistory and the environments early people experienced. It presents a sample of sites representing Washington's geographic regions and touches on historical archaeology, including excavations at fur-trade forts and the Whitman mission, and Cathlapotle, a Columbia River village visited by Lewis and Clark.

The authors portray the discovery of a mastodon butchered by hunters on the Olympic Peninsula 14,000 years ago; the nearly 13,000-year-old Clovis points in an East Wenatchee apple orchard; an 11,200-year-old "Marmes Man" in the Palouse; and the controversial "Kennewick Man," more than 9,000 years old, eroded out of the riverbank at Tri-Cities. They discuss a 5,000-year-old camas earth oven in the Pend Oreille country; 5,000 years of human habitation at Seattle's Metro sewage treatment site; the recovery at Hoko River near Neah Bay of a 3,200-year-old fishnet made of split spruce boughs and tiny stone knife blades still hafted in cedar handles; and the world-renowned coastal excavations at Ozette, where mudslides repeatedly swept into houses, burying and preserving them.

The tale ranges from the earliest bands of hunters, fishers, and gatherers to the complex social organizations and highly developed technologies of native peoples at the time of their disruption by the arrival of Euro-American newcomers. Also included is a summary of the changing role, techniques, and perspectives of archaeology itself, from the surveys and salvage excavation barely ahead of dam construction on the Snake and among Columbia rivers to today's collaboration between archaeologists, Native Americans, private landowners, and public agencies. Color photographs, line drawings, and maps lavishly illustrate the text.

Ruth Kirk, writer and photographer, is the author and coauthor of many acclaimed books, including Exploring Washington's Past: A Road Guide to History, The Olympic Rain Forest: An Ecological Web, and Sunrise to Paradise: The Story of Mount Rainier National Park. Archaeologist Richard D. Daugherty, emeritus professor at Washington State University, was a presidential appointee to the national advisory council on historic preservation. He has conducted archaeological investigations abroad, and directed a number of projects in the state, including several of those described in this book.