The Tibetan Nun Mingyur Peldrön: A Woman of Power and Privilege (Paperback) 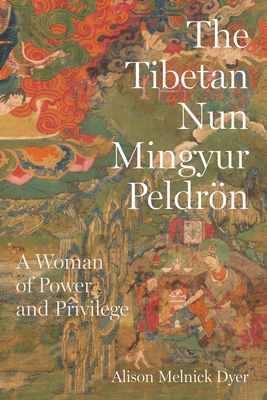 The Tibetan Nun Mingyur Peldrön: A Woman of Power and Privilege (Paperback)

Born to a powerful family and educated at the prominent Mindr ling Monastery, the Tibetan Buddhist nun and teacher Mingyur Peldr n (1699-1769) leveraged her privileged status and overcame significant adversity, including exile during a civil war, to play a central role in the reconstruction of her religious community. Alison Melnick Dyer employs literary and historical analysis, centered on a biography written by the nun's disciple Gyurm sel, to consider how privilege influences individual authority, how authoritative Buddhist women have negotiated their position in gendered contexts, and how the lives of historical Buddhist women are (and are not) memorialized by their communities. Mingyur Peldr n's story challenges the dominant paradigms of women in religious life and adds nuance to our ideas about the history of gendered engagement in religious institutions. Her example serves as a means for better understanding of how gender can be both masked and asserted in the search for authority--operations that have wider implications for religious and political developments in eighteenth-century Tibet. In its engagement with Tibetan history, this study also illuminates the relationships between the Geluk and Nyingma schools of Tibetan Buddhism from the eighteenth century, to the nonsectarian developments of the nineteenth century.