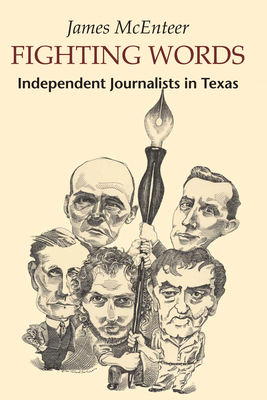 Fighting Words profiles five journalists who published the truth as they saw it, no matter how their reporting angered politicians, social and religious leaders, or other journalists.

The five journalists are William Brann (1855–1898), Don Biggers (1868–1957), John Granbery (1874–1953), Archer Fullingim (1902–1984), and Stoney Burns [Brent Stein] (1942–2011). Though they lived in different eras, all these men dealt with issues that society continues to face—racism, official corruption, religious freedom, educational reform, political extremism of the left and right, the clash of urban and rural values, and the fear of change. Their lives and work constitute a unique, alternative perspective on Texas history and the history of journalism itself.

In addition to the troubling questions they raised on social issues, these independent journalists challenge us, as they challenged the mainline media of their own times, to define the function of journalism and to examine the mandate of the First Amendment. We may doubt the wisdom of some of their convictions, but not the courage they needed to express them in the face of ridicule, hostility, intimidation, and even death. More than the specific causes they fought for, the independents’ passion for truth and their absolute belief in free speech constitute their greatest legacy to us and to journalism.

James McEnteer is an independent scholar and journalist. He is a former Fellow of the Joan Shorenstein Center for the Press, Politics and Public Policy at the John F. Kennedy School of Government, Harvard University.
... ought to be required reading for young journalists, both inside and outside Texas. That would not be a bad idea for journalism teachers as well.... The book ... details the journalism careers of five crusading Texas journalists, who make today's professionals look pasteurized.
— Journalism History