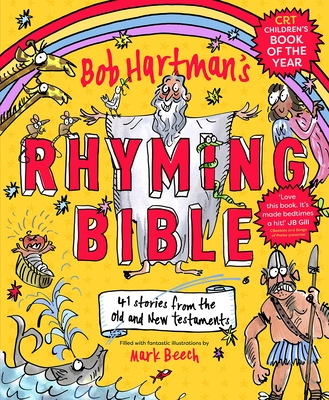 Moses said to Pharaoh, 'Let my people go.'
But Pharaoh said to Moses, 'NO NO NO '

Author of the bestselling Lion Storyteller Bible and YouVersion's The Bible App for Kids, internationally renowned storyteller Bob Hartman retells over 40 classic Bible stories in rhyme. From Esther to Samuel, Zacchaeus to Daniel, join in the rhyming fun with all your favourite characters and see the Bible come alive in Mark Beech's fantastic illustrations.
Bob Hartman has an international reputation as a storyteller and writer. He has entertained audiences on both sides of the Atlantic, including performances at the Edinburgh International Book Festival and Northern Children's Book Festival. His many titles for children include The Lion Storyteller Bible, which has sold over 140,000 copies in the UK since its first publication in 1995. It has been translated into over 11 languages and spawned a number of spin-off titles. Born in the USA, Bob now lives in Wiltshire.