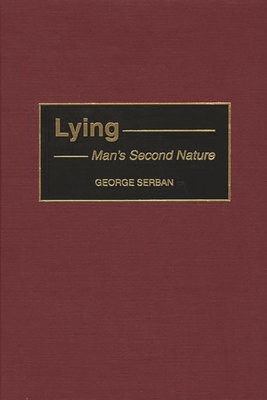 One of the most puzzling problems of our time is society's changing attitude toward truth and lying. Are we experiencing the breaking down of our moral values as many ethicists claim or are we confronted with a new moral paradigm? Serban explores the new moral relativism within the context of the unprecedented social-political and technological advances of the last decades. With the classical values under siege, a new concept of right and wrong has emerged based on a blurred distinction between truth and falsehood. Many forms of lying are considered subjective truth. Political correctness and spinning are part of the social interaction promoted by lawyers, politicians, activist judges, media, among others.

Serban documents that man, in the process of pursuing his goals, tends to manipulate others. Adapting through deception, particularly in crisis, is part of our animal heritage. Our thought processes, protective of our emotions and self-image, are perfectly adapted for the task of lying. Historically, people have always lied, regardless of social-moral restraints and legal prohibitions. Man--to successfully compete in this rapidly changing world full of conflicts, duplicity, and half-truths--either have to learn the new rules of self-protection in the social game of manipulative interaction or become losers. Psychiatrists, sociologists, psychologists, social workers, legal professionals, all other students of human behavior and also general readers interested in understanding the dynamic of social deception will find the work of particular value.

GEORGE SERBAN is Clinical Associate Professor of Psychiatry at New York University School of Medicine and is certified by the American Board of Psychiatry and Neurology. /eDr. Serban is the author of numerous books and articles, including The Tyranny of Magical Thinking. He has appeared on many radio and television programs. He also is in private practice and is a consultant to business corporations.