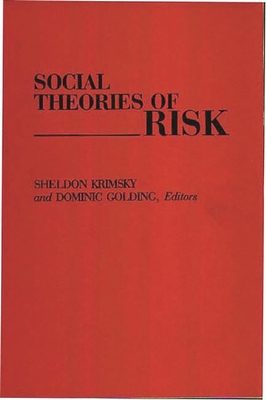 The social science approach to risk has matured over the past two decades, with distinct paradigms developing in disciplines such as anthropology, economics, geography, psychology, and sociology. Social Theories of Risk traces the intellectual origins and histories of twelve of the established and emerging paradigms from the perspective of their principal proponents. Each contributor examines the underlying assumptions of his or her paradigm, the foundational issue it seeks to address, and likely future directions of research.

Taken together, these essays illustrate that the principal achievement of social sciences has been to broaden the debate about risk beyond the narrow, technical considerations of engineers and the physical and life sciences. The authors conclude that expert knowledge is not value-free, that public perceptions of and attitudes toward risks vary according to a wide range of social, psychological, and cultural variables, and that public opposition to particular risks cannot be assuaged by technical fixes. The essays reveal the circuitous paths that lead people to the study of risk, highlight how these paths have crossed and discuss some of the seminal influences on individuals and the field in general. Social Theories of Risk presents a broad, retrospective view of the state of the theory in the social sciences, written by many who have been on the cutting edge of risk research since its early days. The book includes both established and novel perspectives that address the theoretical foundations of the field and reflect what we know about risk as a psychological, social, and cultural phenomenon. The collection of papers not only informs us of the tributary ideas that spawned the social studies of risk, but also how the field has matured. The biographical flavor of the essays provides fascinating reading for established members of the field, and a valuable entree for newcomers. It is an ideal college text for courses in the history of science, environmental policy, and science, technology, and society, as well as the burgeoning array of more specialized courses in risk assessment and management.

SHELDON KRIMSKY is Professor of Urban and Environmental Policy at Tufts University. He has published widely on the social and ethical impacts of technology. His books include Biotechnics and Society: The Rise of Industrial Genetics (Praeger, 1991, Environmental Hazards: Communicating Risks as Social Process (Auburn House, 1988) and Genetic Alchemy: The Social History of the Recombitant DNA Controversy.DOMINIC GOLDING is a Fellow at the Center for Risk Management, Resources for the Future. He is the author of The Different Susceptibility of Workers to Occupational Hazards and contributed to The State of the Earth Atlas.