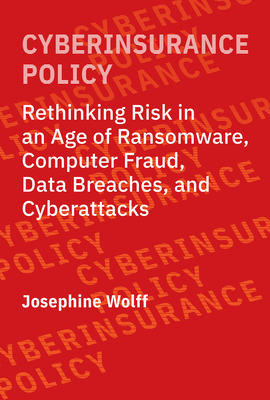 
Not On Our Shelves—Ships in 1-5 Days
Why cyberinsurance has not improved cybersecurity and what governments can do to make it a more effective tool for cyber risk management.

As cybersecurity incidents—ranging from data breaches and denial-of-service attacks to computer fraud and ransomware—become more common, a cyberinsurance industry has emerged to provide coverage for any resulting liability, business interruption, extortion payments, regulatory fines, or repairs. In this book, Josephine Wolff offers the first comprehensive history of cyberinsurance, from the early “Internet Security Liability” policies in the late 1990s to the expansive coverage offered today. Drawing on legal records, government reports, cyberinsurance policies, and interviews with regulators and insurers, Wolff finds that cyberinsurance has not improved cybersecurity or reduced cyber risks.

Wolff examines the development of cyberinsurance, comparing it to other insurance sectors, including car and flood insurance; explores legal disputes between insurers and policyholders about whether cyber-related losses were covered under policies designed for liability, crime, or property and casualty losses; and traces the trend toward standalone cyberinsurance policies and government efforts to regulate and promote the industry. Cyberinsurance, she argues, is ineffective at curbing cybersecurity losses because it normalizes the payment of online ransoms, whereas the goal of cybersecurity is the opposite—to disincentivize such payments to make ransomware less profitable. An industry built on modeling risk has found itself confronted by new technologies before the risks posed by those technologies can be fully understood.

Josephine Wolff is Associate Professor of Cybersecurity Policy at the Fletcher School of Law and Diplomacy at Tufts University and the author of You'll See This Message When It Is Too Late: The Legal and Economic Aftermath of Cybersecurity Breaches (MIT Press). Her writing on cybersecurity has appeared in the New York Times, the Washington Post, Wired, and Slate.