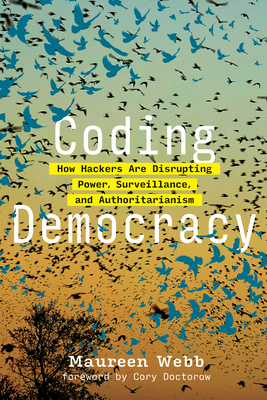 
On Our Shelves Now at:
Hackers as vital disruptors, inspiring a new wave of activism in which ordinary citizens take back democracy.

Hackers have a bad reputation, as shady deployers of bots and destroyers of infrastructure. In Coding Democracy, Maureen Webb offers another view. Hackers, she argues, can be vital disruptors. Hacking is becoming a practice, an ethos, and a metaphor for a new wave of activism in which ordinary citizens are inventing new forms of distributed, decentralized democracy for a digital era. Confronted with concentrations of power, mass surveillance, and authoritarianism enabled by new technology, the hacking movement is trying to "build out" democracy into cyberspace.
Maureen Webb is a labor lawyer and human rights activist. She is the author of Illusions of Security: Global Surveillance and Democracy in the Post-9/11 World and has taught national security law as an Adjunct Professor at the University of British Columbia.