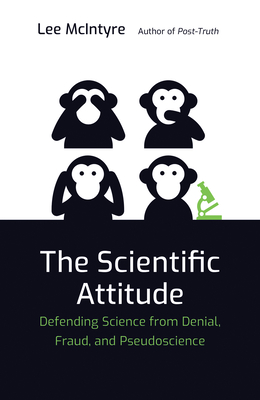 
On Our Shelves Now at:
An argument that what makes science distinctive is its emphasis on evidence and scientists' willingness to change theories on the basis of new evidence.

Attacks on science have become commonplace. Claims that climate change isn't settled science, that evolution is “only a theory,” and that scientists are conspiring to keep the truth about vaccines from the public are staples of some politicians' rhetorical repertoire. Defenders of science often point to its discoveries (penicillin! relativity!) without explaining exactly why scientific claims are superior. In this book, Lee McIntyre argues that what distinguishes science from its rivals is what he calls “the scientific attitude”—caring about evidence and being willing to change theories on the basis of new evidence. The history of science is littered with theories that were scientific but turned out to be wrong; the scientific attitude reveals why even a failed theory can help us to understand what is special about science.

McIntyre offers examples that illustrate both scientific success (a reduction in childbed fever in the nineteenth century) and failure (the flawed “discovery” of cold fusion in the twentieth century). He describes the transformation of medicine from a practice based largely on hunches into a science based on evidence; considers scientific fraud; examines the positions of ideology-driven denialists, pseudoscientists, and “skeptics” who reject scientific findings; and argues that social science, no less than natural science, should embrace the scientific attitude. McIntyre argues that the scientific attitude—the grounding of science in evidence—offers a uniquely powerful tool in the defense of science.

Lee McIntyre is a Research Fellow at the Center for Philosophy and History of Science at Boston University. He is the author of Dark Ages: The Case for a Science of Human Behavior and Post-Truth, both published by the MIT Press.
"[McIntyre] achieves his goal of laying out what makes science distinct from other intellectual pursuits in this accessible analysis.... At a time of concern over assaults to scientific authority, McIntyre's intelligent treatise articulates why the pursuit of scientific truths, even if inevitably flawed and subject to human error, matters."
—Publishers Weekly


"Throughout The Scientific Attitude, McIntyre introduces a large number of examples and basic bibliographical references that give his explanations a great expository clarity and turn the book into a fantastic introductory textbook. . . . This book not only defends science, but proselytizes for it."
—Metascience

"There are many misunderstandings about science, even among scientists. In this “post-truth” world, we must be able not only to explain why claims based on scientific evidence have a superior claim to believability but also to persuade the public to accept them over competing claims that are not based on empirical evidence but are based only on ideology or wishful thinking. Lee McIntyre, a philosopher of science, has spent his entire career grappling with this problem, and in his new book The Scientific Attitude: Defending Science from Denial, Fraud, and Pseudoscience he tries to explain what science is by examining what it is not...A worthy project."—Science Based Medicine

"Perhaps society would benefit from a better understanding of how research is conducted and results are interpreted because if the goal is to 'defend science from denial, fraud, and pseudoscience' you must be able to engage all audiences in the discussion. For this reason, works like The Scientific Attitude are important.... McIntyre does remind us of the good that can come from approaching science with the noble attitude that has advanced modern medicine from guesswork and intuition to the evidence-based practice it is today."
—Chemistry World

"McIntyre argues, what distinguishes science from both pseudo-science and “not-science” (within which he includes art and literature) is its attitude; that is, its sceptical respect for evidence as opposed to mere anecdote, belief or opinion, and its willingness to change its mind when confronted with new data."
—The Guardian

"McIntyre makes an interesting and even convincing case for attitude rather than method as the descriptor of what successful science really is."
—The Skeptic